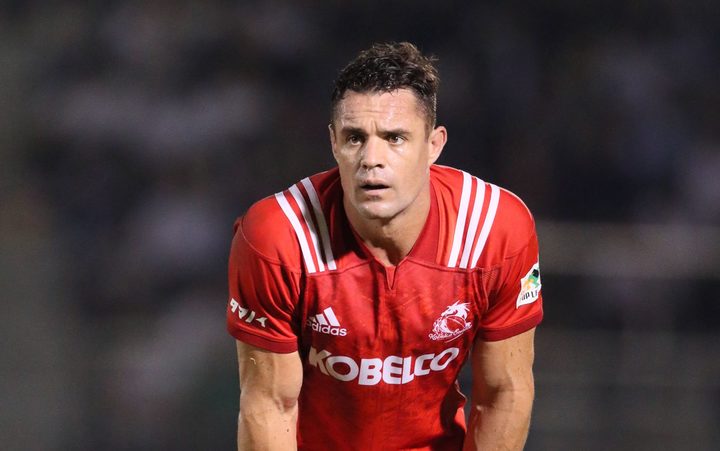 Dan Carter is on the verge of a stunning New Zealand comeback, joining the Blues for Super Rugby Aotearoa as injury cover.

Carter, 38, spent 13 seasons with the Crusaders before playing overseas in France and Japan.

He bowed out of international rugby after the 2015 Rugby World Cup, in which he drop kicked a decisive goal.

Blues coach Leon Macdonald messaged his side on Wednesday, saying Carter was coming in as injury cover for Stephen Perofeta, and he wanted them to know before word got out.

“His motive is to give back to NZ Rugby by sharing his experience/knowledge with us,” Macdonald wrote.

He said it would be a great opportunity for the side to learn from a great player, and asked that Carter be made welcome when he joined the side on Thursday.

Carter is a three-time World Rugby Player of the Year and spent three seasons in Paris with Racing 92 before joining the Kobelco Steelers in Japan in 2018.

He led Kobelco to the title in his debut season.

Carter, a brilliant No 10, would be backup first five to current All Black Beauden Barrett, who has yet to play for the Blues.

On Monday, Carter raised the prospect of professional rugby players competing into their 40s.

The double World Cup winner had chatted with veteran Irish first-five Johnny Sexton in the latest episode of his Kickin It Facebook series and it seems age is no barrier when there is talent and desire.

Carter said the current rugby break enforced by the coronavirus pandemic could be seen as something of a sabbatical that should have big benefits to players and eventually see some of them extend their careers.

The Blues open their campaign against the Hurricanes next week.