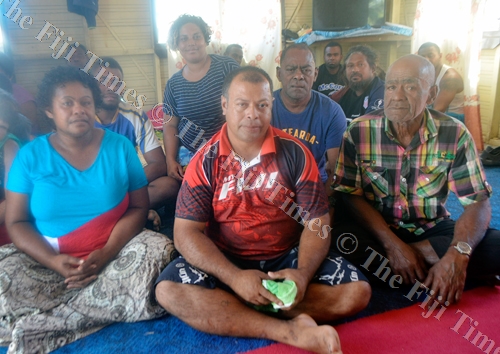 Wilfred Underwood (centre) with his wife Vani Adi (left) meet their family members to discuss the funeral arrangements of their only son Joseph underwood at their home in korovuto Nadi. Joseph is the 8th person to lose his life after the Nabou Accident. Picture: REINAL CHAND

JOSEPH Underwood, 17, was the only child so his parents were clinging to the hope that he would “wake up” and go home with them.

However, when news of his death reached them early last Saturday, they accepted his passing as “the will of God” and that he was in a better place.

His father Wilfred Underwood yesterday shared how heartbreaking it was to watch his son on life support for a week at the Lautoka Hospital’s Intensive Care Unit as a result of the Nabou accident which had already claimed the lives of seven other people.

“I tried to get a response from him last Thursday by pulling his fingers and he responded,” Mr Underwood said.

“After that, I asked him if he wanted to go home and he shook his head as if to say yes. “Some time later that night his heart stopped and the doctors revived him.

“The next day (Friday) Joseph slept the whole day and there was no response from him so I returned home and planned to travel to Lautoka on Saturday morning.”

“The doctor called me about 5am that they were trying to revive him, and then at 5.30am they called to say he had passed (away). It was almost exactly a week to the day I last spoke to Joseph. He called me at 5am that Saturday of the accident to tell me they were getting ready to go to Suva.”

The Year 11 Korovuto College student was one of 16 friends travelling in a mini-van to Suva two Saturdays ago to watch Ratu Navula College’s under-18 rugby team play in the semi-final against Ratu Kadavulevu School.

They were a tight group, all members of the Burning Fire Healing Ministry. Joseph, a former Ratu Navula College student, was a close friend of Atilai “Rui” Ruitoka, who died at the accident scene.

“My son would stay with Rui, and they were in the same youth group. He went to Yavusania to practise an item and this was when they made travel plans. “Well, I thank God that he has given Joe to me for 17 years because He is the Creator. He gives and He takes. I believe we’ll meet Joe again.”