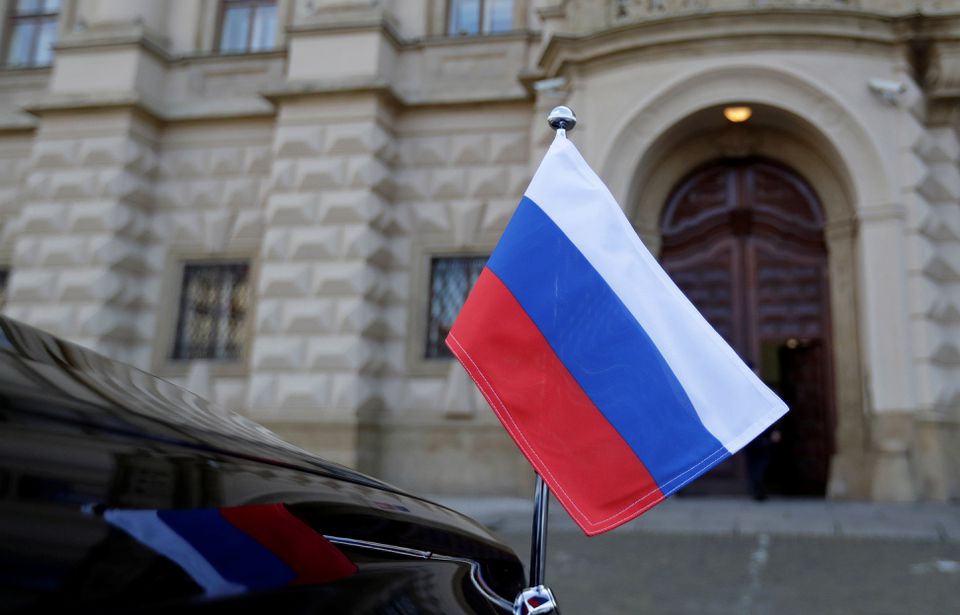 Russian national flag is seen on a car in front of the Foreign Ministry in Prague, Czech Republic, April 21, 2021. REUTERS/David W Cerny

The Czech Republic demanded on Wednesday that Russia allow the return of 20 expelled Czech embassy staff to Moscow by Thursday or face further evictions of its diplomats from Prague.

Speaking to reporters, Foreign Minister Jakub Kulhanek said Prague would equalise staffing at the countries’ respective embassies unless Russia allowed the Czechs back.

Prague on Saturday expelled 18 Russian staff, whom it identified as intelligence officers, after saying two Russian spies accused of a nerve agent poisoning in Britain in 2018 were behind an earlier explosion at a Czech ammunition depot that killed two people.

Russia retaliated by ordering 20 staff out from the Czech embassy in Moscow, which is smaller than the Russian embassy in Prague.

“The counter-reaction of the Russian side…was disproportionate and de facto paralysed the functioning of our embassy,” Kulhanek told reporters.

“If our diplomats cannot return to Moscow, tomorrow afternoon I will decide on lowering the number of staff at Russian Federation’s embassy in Prague so it corresponds to the current situation at the Czech embassy in Moscow.”

The Czech foreign ministry gave the number of Czech diplomats in Moscow at 5, plus 19 other staff, after the first round of expulsions. Russia’s embassy in Prague now has 27 diplomats and 67 other staff, it said.

Both countries have additional smaller numbers of staff at consulates in other cities.