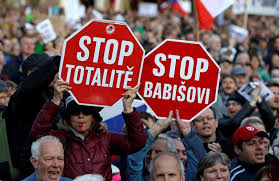 PRAGUE (Reuters) – Thousands of Czechs filled the center of Prague and other cities for a second week in a row to protest against the appointment of a new justice minister who they say they fear could meddle with a criminal case involving the prime minister.

Marie Benesova was named to head the Justice Ministry last week after the resignation of her predecessor. Protesters say they are worried she will try to protect Prime Minister Andrej Babis, who potentially faces a fraud trial.

The case against Babis, a billionaire with business interests in media, food and chemicals, centers on allegations he hid ownership of a farm and convention center a decade ago to get a 2 million euro EU subsidy for small businesses.

He has denied wrongdoing and calls the case politically motivated. He said Benesova’s appointment was not a threat to the justice system.

Monday’s protest was larger than a week ago. Organizers estimated at least 20,000 people filled Prague’s Old Town Square, according to CTK news agency. Police did not give official estimates.

Protesters carried signs calling for an independent justice system and for Benesova to resign. They chanted “We are not blind”.

Thousands also gathered in Brno, the country’s second largest city, and in Ostrava.

Czech police said on April 17 that Babis and others should stand trial for fraud, handing the case to prosecutors.

Babis’s previous justice minister, Jan Knezinek, resigned the day after the police wrapped up their investigation. Babis said Knezinek’s position had only been intended to be temporary. His departure came amid a wider cabinet shuffle.

Benesova had previously served in a caretaker cabinet in 2013, appointed by President Milos Zeman, who has backed Babis. She worked as the top state attorney, appointed by a Zeman-led government in 1999.

In 2017, she supported Babis when she abstained in a lower house vote on lifting his parliamentary immunity.

Despite the allegations and conflict of interest accusations against Babis, his ANO party remains the clear poll leader.