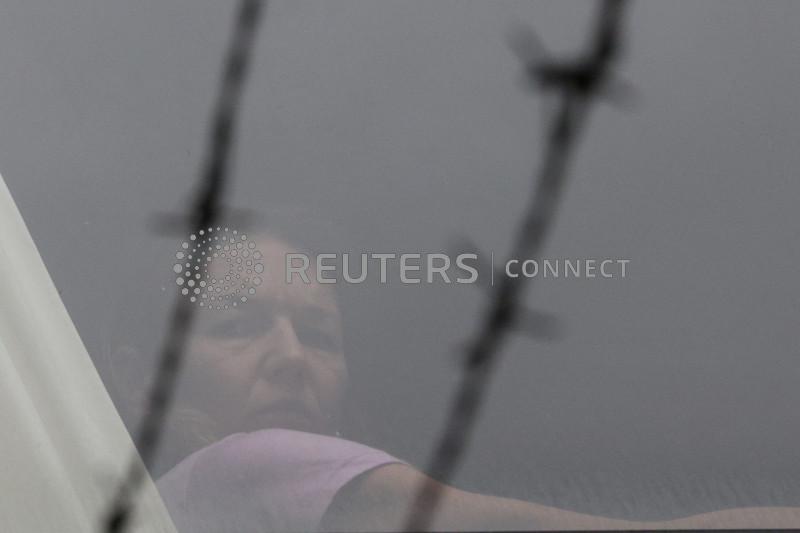 Tennis player Renata Voracova of the Czech Republic looks out a window at the Park Hotel where she is being held while she stays in Australia following the cancellation of her visa, the same government facility where Serbian tennis player Novak Djokovic is believed to be, in Melbourne, Australia, January 8, 2022. REUTERS/Loren Elliott

PRAGUE (Reuters) – Czech tennis player Renata Voracova said she hoped Novak Djokovic would be able to compete at next week’s Australian Open but admitted she was still frustrated that she was forced to leave Melbourne after her visa was cancelled.

Like Djokovic, doubles specialist Voracova had been granted a medical exemption to compete at the Australian Open despite not being vaccinated against COVID-19.

The exemption had been granted on the basis that the 38-year-old had contracted the virus last month, which she said had prevented her from getting vaccinated, along with other medical issues.

“It is a good thing not only for him. Hopefully he can play. Because that is what we went there for: to play tennis and not be part of any inside games,” Voracova, who plans to get vaccinated against COVID-19 in the future, told Reuters.

Voracova was already playing a tournament in Melbourne when her medical exemption was scrutinised again by authorities in the wake of Djokovic’s visa being cancelled by Australian border force officials as the Serbian had arrived in the country without being fully vaccinated against COVID-19 — which is a pre-requisite for all foreigners to enter the country without having to quarantine unless they have a valid medical exemption.

The Serbian world number one had been held in a government detention hotel in Melbourne for five days before he won an appeal against the visa cancellation on Monday, allowing him to resume training ahead of the Australian Open which begins on Jan.17.

Voracova was detained last Thursday in the same hotel as Djokovic before she left the country on Saturday.

Speaking to Reuters in a video call, Voracova said she went through immigration without facing any problems and believed she would have been competing at the Australian Open if the furore around Djokovic’s visa and his vaccination status had not erupted.

“I was there already for one week and since he arrived things changed,” she said. “I am not mad at him.

“I am really sad that this happened. It’s one of the biggest tournaments. You go there and this happens. You can’t even imagine it is possible in the 21st century to happen in this country.”

Voracova, ranked 82nd in doubles, said she felt like she was in the midst of an action movie when she was escorted from the hotel in which she had been staying.

“We didn’t even use the normal lifts. We went through side lifts and total different ways (through the hotel) where people couldn’t see me. And then we went to the garage where there was a van,” she said.

The interrogation took about six hours. She said she did not appeal the decision to have her visa taken away as she was not aware of all the legal implications.

“I really didn’t know after questioning what I was supposed to do, what my rights are. There were people with me from Tennis Australia, lawyers who were helping me. And they didn’t appeal to court. So I didn’t know I could do it. I just followed the advice they give me,” she said.

She said the windows in her room at the government hotel were locked and people were guarding the corridors between the rooms. With no chance to train, she chose to leave Australia.

“It is a big relief that I am home finally. During the day (there) I didn’t feel really good, I couldn’t sleep at all, and I was not eating much,” she said.