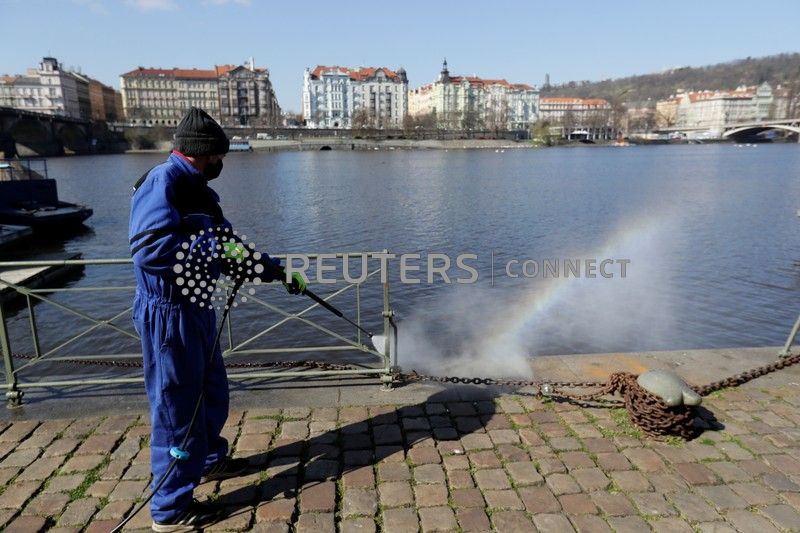 FILE PHOTO: A municipality worker in a protective suit sprays a disinfectant on an embankment along the Vltava river to curb the spread of the coronavirus disease (COVID-19) in Prague, Czech Republic, April 1, 2020. REUTERS/David W Cerny

PRAGUE (Reuters) – Czech lawmakers on Tuesday approved keeping the state of emergency in the country in place until April 30, a shorter extension than the government had sought to crack down on the coronavirus outbreak there.

Prime Minister Andrej Babis’s government had sought a one-month extension to May 11 for the state of emergency, which allows the cabinet to curb some rights of citizens, including freedom of movement or enterprise, and gives it more flexibility in areas such as public procurement.

The government declared a state of emergency on March 12 and it was set to expire in the coming days unless the lower house of parliament backed the extension.

The Czech Republic took some of the swiftest action to all but lock down the country in March as the outbreak quickly spread around Europe, but it has already looked at relaxing some measures as the growth in cases starts to slow.

The country has reported far fewer cases than its western neighbours, with 4,828 confirmed infections as of Tuesday morning, a rise of 5% over the previous day.

The Health Ministry said 127 people have recovered and 80 have died from the virus.