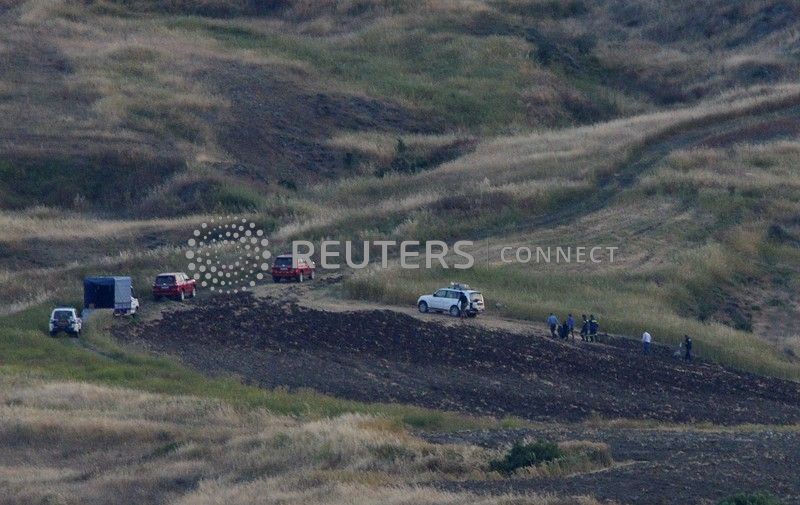 Police officers and rescuers are seen at the area where the body of a woman was discovered near the village of Orounta, Cyprus, April 25, 2019. REUTERS/Stefanos Kouratzis

NICOSIA (Reuters) – Police in Cyprus investigating the disappearance of women from the Philippines discovered a third body on Thursday in a suspected serial murder case which has shocked the Mediterranean island.

A 35-year-old Greek Cypriot, a career officer in the army, was in custody as the primary murder suspect, police said.

The bodies of two women were found in an abandoned mine shaft on April 14 and 20, and are thought to belong to two individuals from the Philippines reported missing in May and August of 2018.

On Thursday police discovered the body of another woman at an army firing range about 14 km (8.6 miles) from the mine shaft but there was no immediate information as to her identity.

Police sources told Reuters another three potential victims, based on the testimony of the suspect, were being sought.

“Inquiries continuing today located a body …a woman, after details obtained from the suspect,” a police source told Reuters, requesting anonymity since investigations are going on.

Earlier, police obtained an extension of a remand order against the suspect on suspicion of killing a woman from the Philippines who disappeared in December 2017, in addition to a remand already obtained for the disappearance and murder of two women in May and August of 2018.

Police sources said the suspect on Thursday gave police details of an additional victim, “either Indian or Nepalese” killed in the summer of 2018.

He also confessed to killing a Romanian woman and her under-aged daughter, the police source added.

In court hearings, police said the army officer was suspected of having approached the dead women on an online dating site. The six year old child of one of the victims is also missing.

Serial killings are virtually unknown in Cyprus, but there has been an uptick in serious crime in recent years. The last serious double-murder case involving the abduction and death of two women, one from Sweden and one from Ukraine, occurred in 1993. The perpetrators were sentenced to life in jail.