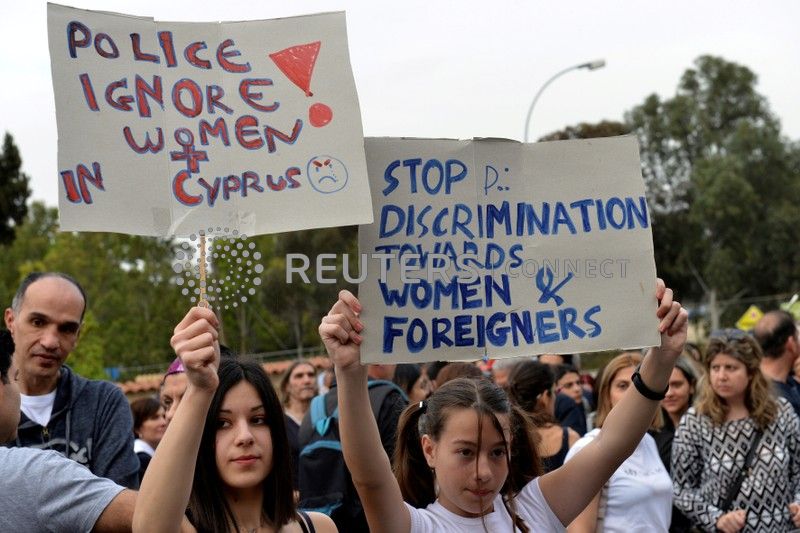 FILE PHOTO: Protesters hold up placards during a public vigil in memory of the victims of a suspected serial killer outside the Presidential Palace in Nicosia, Cyprus, April 26, 2019. REUTERS/Stefanos Kouratzis/File Photo

Four women have been found murdered in the past three weeks, their bodies dumped in three locations west of the capital Nicosia. Investigations are under way into three other disappearances, including two girls aged six and eight.

A 35-year-old career army officer is in custody and police say he has confessed to seven killings in total after having connected with the women on an online dating site..

“I informed the president of the republic that I am resigning for reasons of political sensitivity,” Justice Minister Ionas Nicolaou told reporters after meeting President Nicos Anastasiades.

Nicolaou, whose ministry primarily supervises police, said his resignation was not an assumption of any responsibility, while adding there were “apparent shortcomings” in how police investigated the reports of the women’s disappearances.

“The consequential extension of this abhorrent crime doesn’t only affect police, but society in general, and I refer to a mentality and perception which does not honour any of us,” he said, without elaborating.

In a statement, Anastasiades said he was “deeply saddened” to accept the resignation, calling Nicolaou one of his closest associates.

Cypriot police have faced a torrent of criticism over how they handled each case – the magnitude of which was unknown when tourists accidentally found a bound body in a mine shaft flooded by heavy rain on April 14.

That victim, Marry Rose Tuburcio, 39, from the Philippines, is the only one formally identified of the four women discovered since then. She went missing with her six-year-old daughter Sierra in May last year.

When acquaintances reported her disappearance to police they were told she and her daughter had probably crossed into the northern part of the divided Mediterranean island, a breakaway Turkish Cypriot state.

A fresh search for other victims was underway on Thursday in a man-made lake near a copper mine. One victim was found in a suitcase weighed down with a block of cement in the lake on Sunday.

A mother and daughter from Romania, thought to be the first victims, disappeared in September 2016, and the last of the victims, from the Philippines, around August 2018.

Police say they will conduct an investigation into any perceived shortcomings.