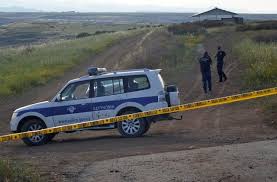 Police secure the area where the body of a woman was discovered near the village of Orounta, Cyprus, April 25, 2019. REUTERS/Stefanos Kouratzis

NICOSIA (Reuters) – Cypriot police searched on Friday for more victims of a suspected serial killer amid mounting public accusations that authorities bungled investigations and failed to heed concern about the safety of women.

Several hundred people attended a candlelit vigil in the Cypriot capital Nicosia on Friday evening, and observed a minute’s silence for what are believed to be seven victims, all foreign women.

The main opposition party, the left-wing AKEL, called for the resignation of the justice minister and police chief over their handling of the case.

Justice Minister Ionas Nicolaou and Police Chief Zacharias Chrysostomou have said there will be an investigation into any perceived shortcomings.

Police sources said the suspect, a 35-year-old army officer who has been in detention for a week, has confessed to seven killings. This would make it by far the worst peacetime crime committed against women on the island in living memory.

The bodies of three women, including two thought to be from the Philippines, have been recovered. Police sources said the suspect had indicated the location of the third body, found on Thursday, and had said the person was “either Indian or Nepali”.

Police were combing three different locations west of the capital Nicosia in a search for more bodies.

A team of British detectives is due to arrive on the island on Monday to help with the investigation, police said.

“These women came here to earn a living, to help their families. They lived away from their families. And the earth swallowed them, nobody was interested,” AKEL lawmaker Irene Charalambides told Reuters.

“This killer will be judged by the court but the other big question is the criminal indifference shown by the others when the reports first surfaced. I believe, as does my party, that the justice minister and the police chief should resign. They are irrevocably exposed.”

Police have said they will investigate any perceived shortcomings in their handling of the case.

One person who did attempt to alert the authorities over the disappearances, a 70-year-old Cypriot citizen, has said his motives were questioned by police.

Several hundred people gathered for Friday’s vigil, organized on social media on Orthodox Good Friday which is one of the holiest dates on the Christian calendar.

“We are here … for our victims. We ask for justice for all these girls that were brutally murdered. It is a very devastating time, because we are all just here to work,” said Lissa Jataas, of the OBRERAS Empowered Filipino Migrant Movement in Cyprus.

“Nobody deserves this,” she told Reuters, her voice breaking.

The bodies of the two Filipino women, reported missing in May and August 2018, were found in an abandoned mine shaft this month. Police discovered the body of the third woman at an army firing range about 14 km (9 miles) from the mine shaft.

Police are now searching for the six-year-old daughter of the first victim found, a Romanian mother who disappeared with her eight-year-old child in 2016, and a woman from the Philippines who vanished in December 2017.