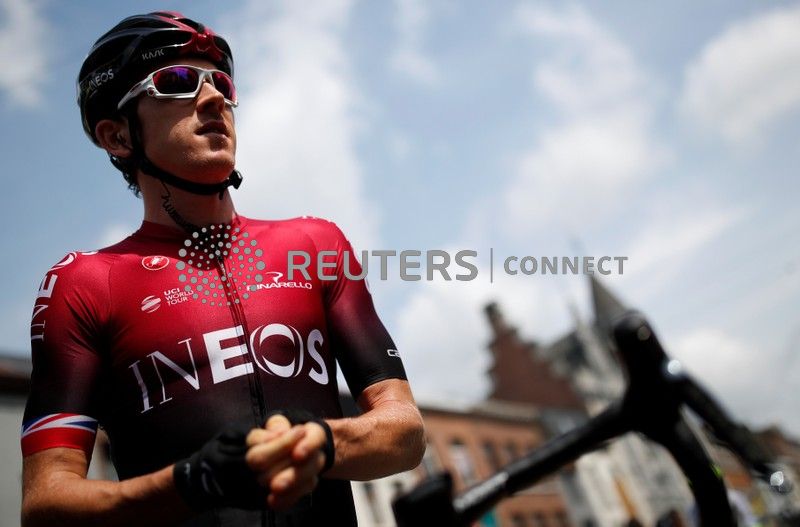 Champion Geraint Thomas and his Ineos team found themselves in the Tour de France driving seat after gaining considerable time on a handful of rivals as crosswinds caused chaos in the peloton in the climax of Monday’s 10th stage.Thomas was on the right end of a bunch split 35 kilometres from the finish of the 217.5km ride from St Flour with France’s Thibaut Pinot, Dane Jakob Fuglsang, Colombian Rigoberto Uran and Australian Richie Porte trapped behind.

Ineos were the driving force at the front of the bunch and with the help of sprinters’ teams and Nairo Quintana’s Movistar, they increased the gap to 1:40 in the final kilometres after Pinot and company came agonisingly close to making it back.

“We were in the perfect position when it split – we all committed when we needed to,” said Thomas, who moved up to second overall.

“When they tried to close it as quickly as possible but couldn’t manage it, that’s when the elastic snapped and we really gained a bit of time.

“It’s a good gap now – and we’ve landed a good blow on a day when you wouldn’t really have expected it. To gain a minute and a half due to a positioning error on their part is great from our point of view. In the end it’s a really good day for us.”

Spain’s Mikel Landa, who featured in the first group, crashed when a rider lost balance next to him and he crossed the line with a 2:08 deficit.

The move caused a major shakedown of the rankings, with Thomas 1:12 behind France’s Alaphilippe.

Thomas still leads Bernal by four seconds but Pinot slipped down to 11th, 1:21 behind Thomas going into the first rest day.

Kruijswijk is fourth, 15 seconds behind Thomas, with Yates in seventh place 35 seconds adrift of the reigning champion, and 17 seconds ahead of eighth-placed Quintana.

It was the worst possible scenario for Pinot, one of the world’s best climbers who was hoping to battle it out with Thomas in the mountains, as he lost a massive amount of time on the flat.

“Nothing to say, it was a shitty day,” said a tearful Pinot, who started the day as the best-placed of the overall contenders after gaining almost half a minute with a brilliant attack in Saturday’s eighth stage.