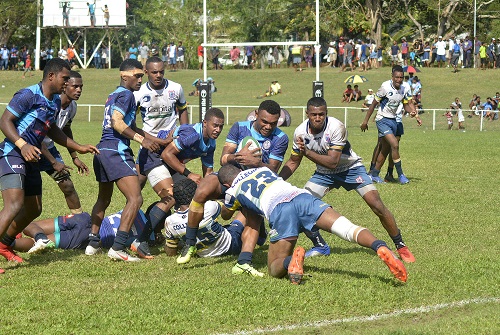 CUVU College upset defending champion Ratu Navula College in the semi-finals of the Western Secondary Schools Rugby Union under-18 competition at Prince Charles Park in Nadi yesterday to book a spot in the quarter-finals of the Vodafone Super Deans Trophy Championship.

Winger Aisea Busa proved to be the hero for the Sigatoka based school scoring a try in each half.

Busa crossed the Ratu Navula try line within three minutes after the opening whistle before Ratu Navula replied through halfback Iliesa Ratunavu to draw level before the break.

It was all Cuvu College in the second half as the side dominated possession and territory to score another three tries to seal victory.

Busa got his second after a well worked backline movement while replacements Jone Naulunisau and Apenisa Kuruisaqila also got on the score sheet.

Half back Kepeli Mataitoga kicked a conversion to add to the tally.

Entry to the Deans quarter-final was made simple for Cuvu College after Lautoka Andhra College pulled out of the semi-finals.

This means Natabua High School will face Ratu Navula in the next match with the winner to face Cuvu College in the final to determine the first and second place positions. Cuvu College captain Josateki Tuituba said it was a tough game but they were happy to qualify for the Deans Trophy quarter-finals.

Tuituba said they were able to avenge their 10-7 loss to Ratu Navula during the round robin stage. Ratu Navula captain Jonetani Bokini said they played well in the first half but lost momentum after the break.

“We now have to defeat Natabua High School next to get to the national quarter-finals,” Bokini said.

“We made a lot of mistakes that cost us the match.”

Ratu Navula will play Natabua at Churchill Park in Lautoka next Saturday.