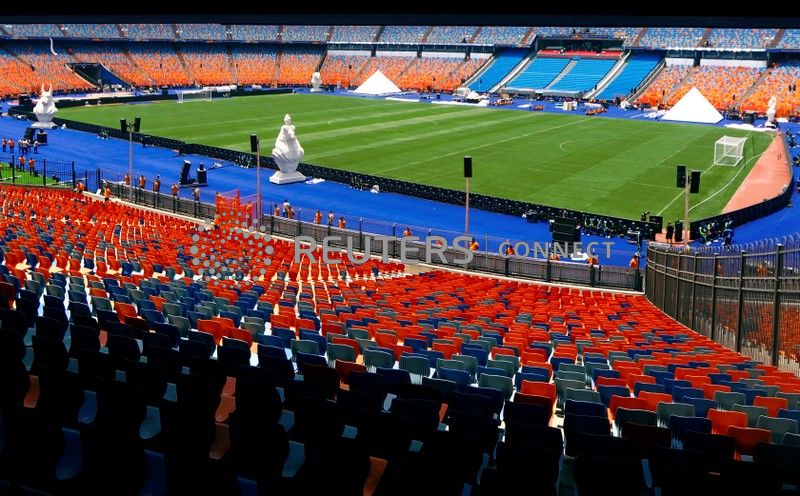 A general view of Cairo International Stadium as employees and security complete their work ahead of the Africa Cup of Nations opening soccer match between Egypt and Zimbabwe in Cairo, Egypt June 19, 2019. REUTERS/Amr Abdallah Dalsh

CAIRO (Reuters) – Team participating in the Africa Cup of Nations in Egypt have been warned about the heat over the next month as players face the possibility of playing in extreme temperatures.

A statement from the Confederation of African Football says the average temperature over the next month is expected to be between 35-38 degrees Celsius with an average humidity of 40-60%.

“This would give a high wet bulb globe temperature (WBGT) index reading above 32 degrees,” it said.

“It is certain that most teams will be aware of this and will train accordingly,” said CAF.

“At this level, FIFA recommends three minute rest-and-refreshing breaks in the 30th and 75th minutes.

“These breaks must require the provision of cold containers on wheels to put crushed ice, drinks for referees and small towels cold and wet to place around the neck for 26 people (four referees and 22 players).”

“It will also be necessary to prepare for any eventuality of emergencies,” CAF added.

“It will be important to be able to diagnose and treat heat-related illnesses, if they occur on site.”

The timing of the Cup of Nations has also changed from January every two years to mid-year, although heat is only an issue at finals being played in the northern hemisphere.

Egypt were chosen above South Africa to be the hosts of 2019 final when Cameroon were stripped of the right to host the event late last year.

Had the tournament been played in South Africa over the next month, teams would have to deal with temperatures ranging from 24 degrees Celsius down to below freezin