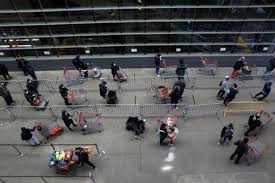 Shoppers practice social distancing as they wait with their carts to enter a Target store in Manhattan during the outbreak of the coronavirus disease (COVID-19) in New York City, New York, U.S., April 1, 2020. REUTERS/Brendan Mcdermid

NEW YORK (Reuters) – New York Governor Andrew Cuomo on Wednesday ordered the closure of all New York City playgrounds to stop young people from gathering in violation of rules aimed at stanching the coronavirus outbreak at its U.S. epicenter.

At the same time, the governor urged police in the most populous U.S. city to become more aggressive at enforcing social distancing, with deaths in the state rising to 1,941, nearly 400 more than on Tuesday.

Cuomo, one of the most prominent U.S, public figures in the battle to slow the spread of the pandemic, said he was closing playgrounds, swing sets, basketball courts and similar spaces, while open spaces in parks would remain open for now.

“Young people must get this message, and they still have not gotten the message, you still see too many situations with too much density by young people,” said Cuomo, who pointed to data showing the outbreak could reach its apex at the end of April.

The governor also chided New Yorkers for being irresponsible, after a reporter asked him about a crowd that gathered at a Manhattan pier to watch the arrival of the USNS Comfort, a 1,000-bed hospital ship.

“How reckless and irresponsible and selfish for people not to do it on their own,” he said.

Medical experts on the U.S. government’s coronavirus task force on Tuesday said they were predicting that even with strict observance of stay-at-home orders and other precautions, between 100,000 to 240,000 people could ultimately die from the respiratory disease.

More than 30 states and Washington, D.C., have restrictions on movement, a total of about 250 million people or three-quarters of the U.S. population.

With rent and mortgage payments due on Wednesday, the first day of the month, and with job losses soaring and medical equipment in short supply, Americans steeled themselves for months of uncertainty.

Alfa Cristina Morales, 21, lost her job as a line cook at an Oakland, California, coffee shop, along with her health insurance, three weeks ago.

Now she has been forced to take the money she had saved for a U.S. citizenship application and use it to pay bills, including her April rent. She is not sure how she and her 2-year-old son will make it through May. She has applied for unemployment benefits, which could take weeks to arrive.

“We’re worried that it won’t be enough,” she said.

In Florida, Governor Ron DeSantis said he would sign an executive order limiting all activity except essential services for 30 days starting on Thursday night to try to limit the spread of the novel coronavirus.

DeSantis had resisted calls by health experts and others to extend safe-at-home orders in Miami and other areas to the entire state.

Florida and U.S. officials were working on a plan to let thousands of cruise ship passengers exposed to an onboard coronavirus outbreak disembark, a day after President Donald Trump urged the governor to drop his opposition to their docking.

One of the two Dutch cruise ships is Holland America Line’s MS Zaandam. Nearly two-thirds of its passengers, those who passed a medical screening, were moved to the line’s sister ship, the Rotterdam.

Both vessels were on the way to Port Everglades in Fort Lauderdale, the Zaandam carrying nearly 1,050 passengers and crew, and the Rotterdam almost 1,450.

Jennifer Allan, whose 75-year-old father and 70-year-old mother are sick and stuck aboard the Zaandam, was asked on NBC’s “Today” show what she would say if she could speak with DeSantis.

“I would beg him and everybody who has the power to make this happen that we need to look at the humanity of what’s going on right now. There needs to be compassion for these people.

DeSantis said he understood many of the passengers were foreign nationals.

“Of course my concern is simply that we have worked so hard to make sure we have adequate hospital space in the case of a COVID-19 surge that we wouldn’t want those valuable beds to be taken because of the cruise ship,” DeSantis said in a televised announcement.

“I think the (Trump) administration has seen a lot of the cruise ships take up a lot of resources and so we just want to get to a point where the resources can be used for the folks here.”

Florida has reported 6,490 cases of coronavirus, including 251 non-residents, and 85 deaths, according to the state website. It ranks eighth in the number of new cases reported in the past 24 hours, analyst Michael Newshel of investment bank Evercore ISI said in a research note.