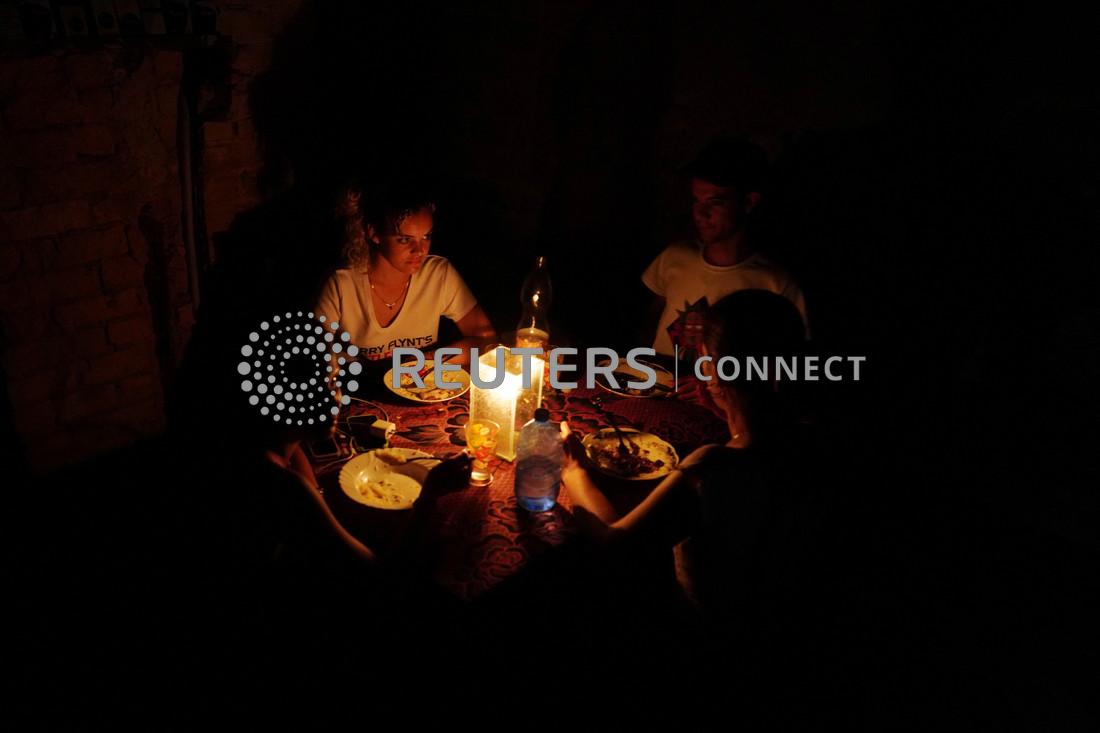 FILE PHOTO: A family has dinner during a blackout in the aftermath of Hurricane Ian in Havana, Cuba, September 28, 2022. REUTERS/Alexandre Meneghini

HAVANA (Reuters) – Cubans took to the streets on Thursday night to bang pots and protest across several neighborhoods in the capital Havana as the country entered its third day of blackouts following Hurricane Ian.

The massive storm, now ploughing north along the southeast coast of the United States, caused Cuba’s grid to collapse earlier this week. It knocked out power to the entire island of 11 million people, flattened homes and obliterated agricultural fields.

For some Cubans – already reeling from shortages of food, fuel and medicine – the prolonged blackout was the last straw.

Jorge Luis Cruz, of Havana’s El Cerro neighborhood, stood in his doorway on Thursday evening banging a metal pot and shouting in anger. Dozens of others on side streets around his home could be heard banging pots from terraces and rooftops in the dark.

“This isn’t working, enough of this,” Cruz told Reuters. “All my food is rotten. Why? Because we don’t have electricity.”

Cruz said his family did not want him to take to the street out of fear he would be hauled off to jail.

Police arrested more than 1,000 people, according to estimates from human rights groups, and hundreds of protesters remain in jail, official figures show.

The Cuban government says those it jailed were fairly tried and found guilty of vandalism, assault and in some cases, sedition. Human rights groups, however, say they were subjected to sham trials and unfairly jailed for exercising their right to free speech and protest.

A Reuters journalist confirmed pot-banging and small groups protesting peacefully on the street in several other areas of the city.

Internet communications, by cell phone and landline, appeared to fall across Havana just before 9 p.m. local time. Communications remained down until around 3 a.m. on Friday.

It was not clear why communications had fallen. The Cuban government did not immediately reply to a request for comment on the situation.

In Havana, the pot-banging appeared to align with areas without electricity. Elsewhere in the city, streets were largely quiet.

Officials earlier on Thursday had announced progress in restoring power to Havana, where the lights were back on in neighborhoods throughout the capital. However, parts of the city, outlying provinces as well as vast swathes of western Cuba, still remained in the dark.

Sultry temperatures and abundant mosquitoes – combined with the threat of mosquito-borne Dengue fever – had nerves on edge.

“It’s all a lie, they don’t get anything done. We still don’t have light and no one tells us why,” said Tiare Rodriguez, 54, a resident of Havana’s 10 de Octubre neighborhood. She had joined a small group that was banging pots and milling about the street, too hot to remain in her home.

“Our food is going to waste, our children’s milk has been lost. Who will replace it?” she said. “No one.”