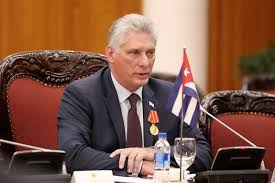 HAVANA (Reuters) – Cuban President Miguel Diaz-Canel accused the Trump administration on Saturday of dragging relations with the United States to their worst level in decades and called on Cubans to strengthen the Communist-run country’s defenses and economy. Diaz-Canel, in a speech closing the National Assembly, said the United States is engaging in an “asphyxiating […]