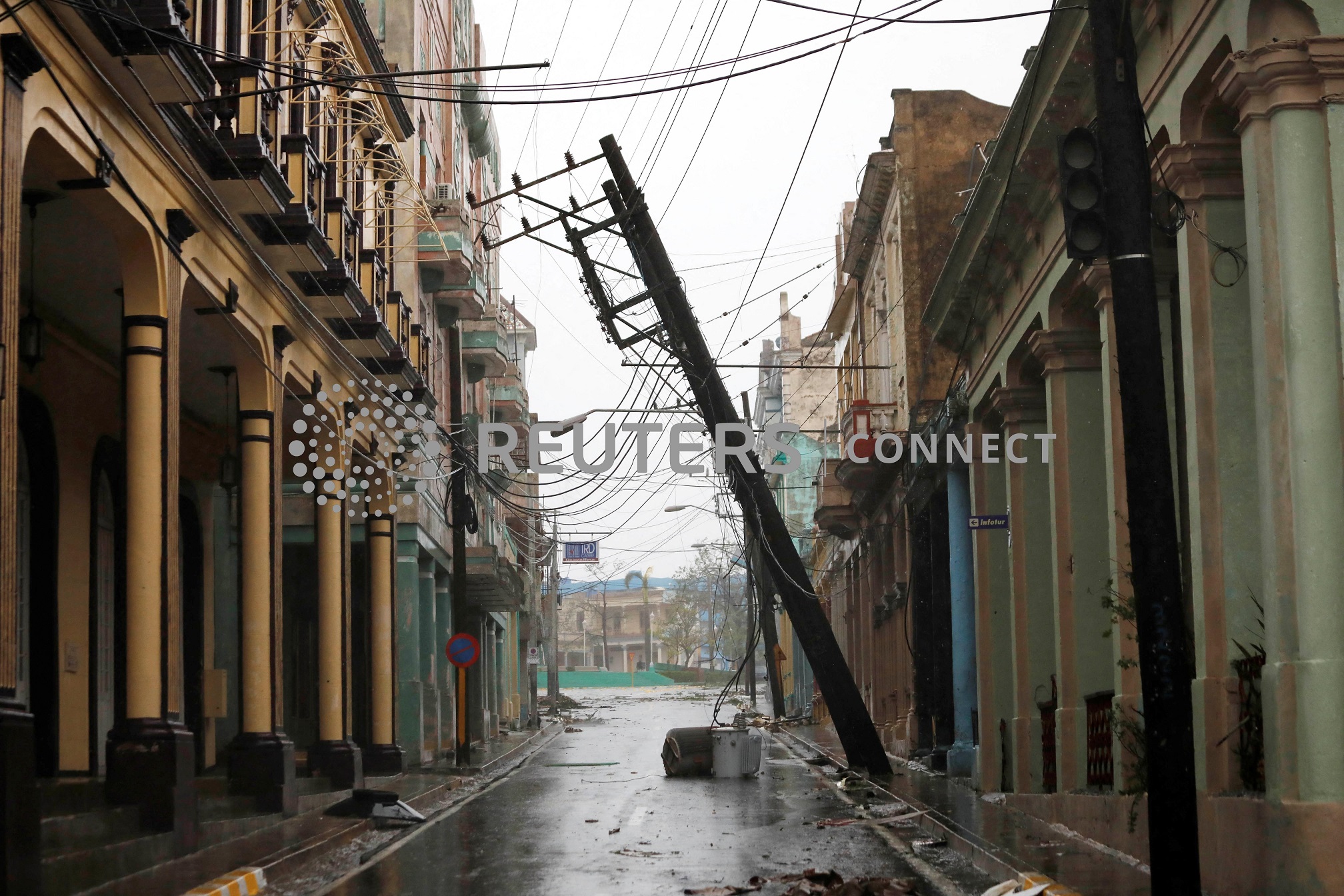 FILE PHOTO: A downed pole is seen on the street in the aftermath of Hurricane Ian's passage through Pinar del Rio, Cuba, September 27, 2022. REUTERS/Alexandre Meneghini

By Dave Sherwood and Nelson Acosta

HAVANA, Cuba (Reuters) – Cuba had restored power to at least some consumers in the majority of its provinces, the state electricity provider said Wednesday, after Hurricane Ian caused the country’s grid to completely collapse, turning off the lights for 11 million people.

Cuba’s already frail grid, largely dependent on antiquated, Soviet-era oil-fired generation plants and scarce fuel, had been faltering for months ahead of the storm. Hours-long daily blackouts have become routine across much of the island.

But officials said Hurricane Ian had proven too much, knocking out power even in far eastern Cuba, which was largely unaffected by the storm.

“The repair work…has allowed the recovery of 224 megawatts, providing service to a part of the consumers in 12 provinces of the country,” the state electricity provider said.

That 224 megawatts represents approximately 7% of a peak daily load of 3,259 megawatts just prior to the hurricane´s arrival, according to official figures. The grid operator said it was still working to recover high-tension wires that had been toppled by the storm in several provinces.

“This blackout is the last thing the country needed,” said Ramiro Perez, a 72-year-old retired school teacher and diabetic who had ventured out from his home in Havana to find food and medicine. “I think we´ve finally hit bottom.”

Havana caught the tail end of Ian as it barreled off the island and into the Gulf of Mexico toward Florida, leaving the city of crumbling, decades-old buildings and pot-holed streets in a tangled mess of downed trees, trash and electrical and telephone wire.

At least five buildings collapsed completely in Havana, according to official reports, and 68 were partly destroyed. More than 16,000 people were relocated to shelters.

Officials gave no estimate of when power would be fully restored to the capital city.

Puerto Rico, further east in the Caribbean, suffered a similar, island-wide blackout after Hurricane Fiona hit there on Sept. 18, prompting outrage among residents. More than 300,000 customers remained without power in Puerto Rico as of Wednesday, out of 1.468 million total customers.

The timing of the hurricane could not have been worse for crisis-racked Cuba. The prospect of prolonged blackouts in the sultry city – where mosquitoes are abundant and temperatures too hot to sleep at night – had residents anxious on Wednesday.

“We´re always running the risk that our food goes bad,” said Freddy Aguilera, owner of a small restaurant in Havana unable to open Wednesday. “We don´t have a generator, no way to preserve our products.”

Food, fuel and medicine shortages, acute even before the storm, left many Cubans wondering where to turn as most businesses remained closed, repairing damage and waiting for the power to return.

“Look at the flood water,” said Havana resident Olga Gomez, who lives near Havana´s waterfront Malecon, a boulevard prone to flooding during storms. “We have to see where we can find bread, so our boys have something to eat.”

West of Havana, the provinces of Pinar del Rio and Artemisa, which took a more direct hit from Ian, were still entirely without power, or communications, on Wednesday.

Roads into the region were littered with downed trees, gas stations closed, and many low-lying coastal areas remained flooded and impassable. By mid-day Wednesday, the Cuban government had yet to release official estimates of damage to crops, tobacco or homes in the two rural farming provinces.

On Wednesday, Ian was approaching Florida with Category 5 power, with sustained winds of 155 miles per hour (250 km per hour), the U.S. National Hurricane Center said, as it began to lash Florida’s Gulf Coast with violent gusts and drenching rains.

Forecasters say Ian will unleash wind-driven high surf, torrential rains that may cause coastal flooding of up to 12 feet (3.7 meters) along with intense thunderstorms and possible tornadoes.

(The caption of the image used on this story has been corrected, no change in text)

(Reporting by Dave Sherwood in Havana; Editing by Chizu Nomiyama and Lisa Shumaker)