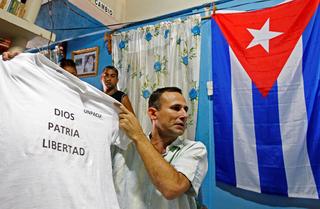 HAVANA (Reuters) – One of Communist-run Cuba’s leading dissidents, Jose Daniel Ferrer, was due to go on trial on Wednesday on charges of abducting and assaulting a man, his supporters said, in a controversial case that is being closely watched worldwide.

The Cuban government has not confirmed that Ferrer was going on trial, but it has confirmed that he was arrested and is in jail. European officials, Amnesty International and the U.S. Embassy in Havana have said they will be watching the trial.

Ferrer, 49, is the leader of the Patriotic Union of Cuba (UNPACU), one of the country’s largest and most active opposition groups. The government calls him a U.S.-financed counterrevolutionary but said he was not jailed for his political views. It accused him instead of being a violent common criminal who kidnapped a man and caused him serious injuries last September.

Supporters of Ferrer, who was arrested last Oct. 1, say the charges are false and merely an attempt to silence a vocal critic. They say the trial – which foreign media have not been invited to cover – is a sham.

The case has garnered international attention, with global rights organizations, the European Parliament and the U.S. government calling for Ferrer’s release.

“It cannot be a crime to criticize policies that have set Cuba’s development tumbling backwards for the past 61 years,” U.S. Secretary of State Mike Pompeo wrote in an open letter to his Cuban counterpart Bruno Rodriguez on Monday.