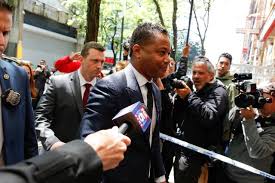 (Reuters) – Actor Cuba Gooding Jr. reported to New York City police on Thursday after a woman accused him of groping her at a Manhattan bar last weekend.

Television pictures showed the “Jerry Maguire” actor entering an NYPD building without saying anything to news media outside.

Gooding has denied the allegation, which was made by an unidentified woman who said Gooding touched her breasts at the bar on Sunday night.

Gooding’s attorney said on Thursday he did not expect the actor to be charged, given security video from the bar that he said showed no criminal conduct by Gooding.

“I would be shocked if he is charged,” attorney Mark J. Heller told Reuters ahead of Gooding’s arrival. “We will have to see how it evolves.”

The New York Police Department did not immediately return a request for comment.

Gooding won the Academy Award for best supporting actor in 1997 for his portrayal of an athlete in the film “Jerry Maguire.” In 2016, he was nominated for an Emmy for playing O.J. Simpson in the miniseries “The People v. O.J. Simpson.”