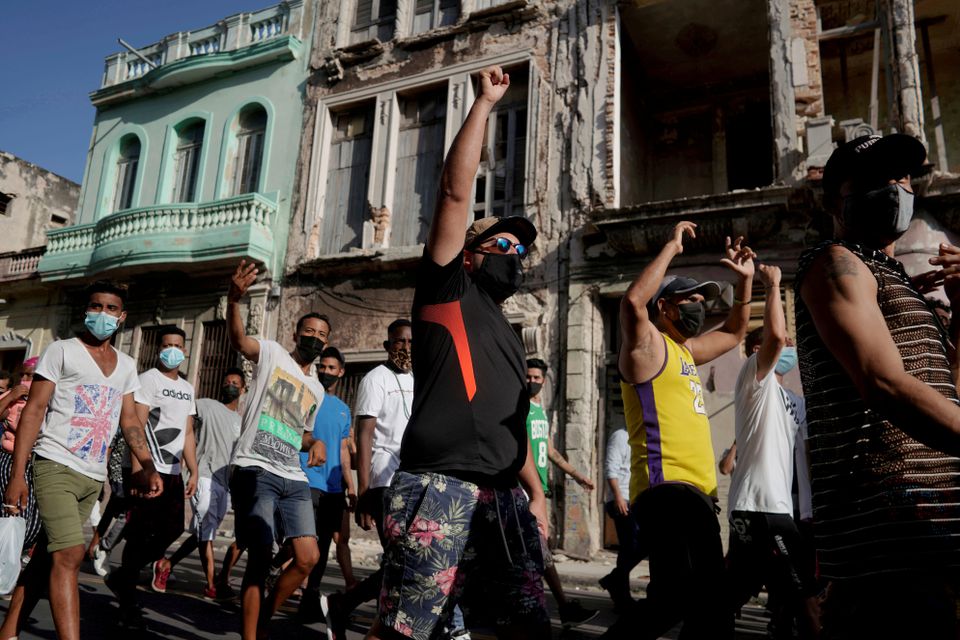 People shout slogans against the government during a protest against and in support of the government, amidst the coronavirus disease (COVID-19) outbreak, in Havana, Cuba July 11, 2021. REUTERS/Alexandre Meneghini//File Photo

Cuba’s National Assembly on Thursday approved a raft of laws broadening citizens’ legal rights even as the Communist-run country comes under fire at home and abroad for a crackdown on protests earlier this year.

The changes stem from the 2019 constitution, which required reforms to modernize Cuba’s judicial and penal codes. But they address legal voids identified by activists, who allege authorities flaunted due process following unprecedented protests on the island in July.

Cuban lawmakers and judges said the new laws increase protection for those accused of a crime and should improve transparency.

They require, for example, defendants be notified of potential charges against them, and that those detained be granted the right to an attorney within 24 hours.

Citizens will also be allowed access to their own court files and documents, according to the new law.

Eloy Viera, a Cuban lawyer and legal analyst who lives in Canada, said the laws were a major step forward in enshrining a citizen’s right to defend him or herself in a court of law.

“This law offers more guarantees and adheres much more to international standards than the regulations currently in force,” Viera said.

But how those laws are implemented will determine whether or not Cubans see significant changes in their legal rights, said William LeoGrande, a professor of government at American University in Washington.

“The laws… still give officials considerable discretion and only time will tell how they use it, especially in political cases,” he said.

Dissidents and human rights organizations say more than 1,000 demonstrators were arrested after the July protests, the largest anti-government rallies since Fidel Castro’s 1959 revolution. Some prisoners were held without charge, incommunicado and without representation, rights groups say.

The Cuban government says those arrested in July were guilty of crimes including public disorder, resisting arrest and vandalism. It has declared opposition marches planned for Nov. 15 as illegal, saying they are funded and promoted by the United States.

The laws passed Thursday are set to take effect in 2022. Legal analyst Viera said it was unlikely they would be retroactive.

“I do not believe that this new legislation will have a definitive influence on the processes already initiated today, and politically motivated, by the July 11 protesters,” he said.

Some legal experts said any advances in the penal code would be overshadowed by the one-party system of government.

The reforms nonetheless eliminate a long-critiqued law that allowed authorities to jail someone they said was potentially dangerous, a maneuver critics say was often used against dissidents.

They also include a prohibition on unlawful detention.

Independent journalist Yoani Sanchez said that was not enough.

“Repressive laws are still in force that are arbitrarily applied frequently against opponents, activists and independent journalists, such as home confinement and the prohibition of leaving the country,” she wrote.