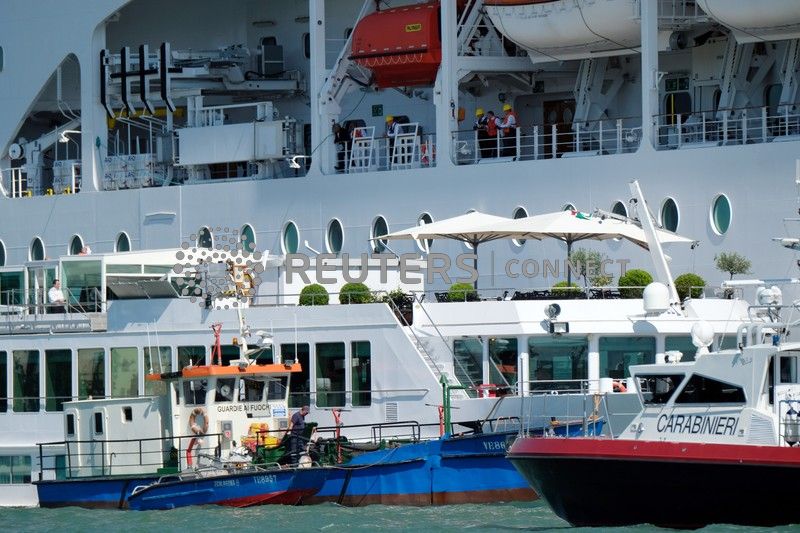 VENICE, Italy (Reuters) – A towering cruise ship collided with a dock and a tourist boat in Venice on Sunday, injuring four people and reigniting calls for large vessels to be banned from the lagoon city.

MSC Cruises said the 2,679-passenger Opera, a 54-metre high and 275-metre long liner which dwarfed the Venice skyline, was approaching a passenger terminal on the Giudecca canal when it hit the dock and a nearby ferry after a technical problem.

Footage of the incident showed passengers who had been waiting at a wharf in San Basilio-Zattere fleeing for safety as the huge ship, its horns blaring, crashed into the much smaller, moored “River Countess” boat, which had 110 people onboard.

“I thought the ship was going to crash into my house,” a resident living nearby told Italy’s state television.

Pino Musolino, chairman of the northern Adriatic Sea port authority, said four people had suffered minor injuries in the crash. Emergency workers said the cruise ship appeared to have lost control after a steel cable that tied it to a tugboat snapped.

Local media said the four injured were female tourists from the United States, Australia and New Zealand aged between 67 and 72.

The accident rekindled a heated row in Italy over the risks to the fragile ecosystem and monuments of Venice posed by cruise ships that routinely sail very close to the shore.

The safety of big ships in European cities has been highlighted by the crash last week of a cruise liner with a pleasure boat on the Danube in Budapest. Twenty-eight people were presumed killed, nearly all South Korean tourists.

Italian Transport Minister Danilo Toninelli said on Twitter the Venice incident was proof that big ships should not travel on the Giudecca, a major thoroughfare that leads to St. Mark’s Square.

“After many years of inertia, we are finally close to a definitive solution to protect both the lagoon and tourism,” he said.

Ships weighing more than 96,000 tonnes were banned from the Giudecca canal in 2013, while the number of smaller ships using the waterway was limited to five a day, but that legislation was overturned at the end of 2015.

The Italian government decided in 2017 that the largest ships weighing more than 100,000 tonnes would have to take a less glamorous route to the industrial port of Marghera, far from the Giudecca and Grand canals.

However, those plans were expected to take four years to come into force.