Critics gush over the spectacle and story of ‘Avengers: Endgame’ 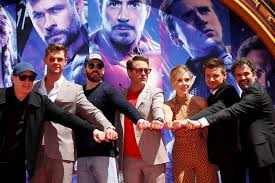 As of Tuesday afternoon, all but one of 56 “Endgame” reviews collected by the Rotten Tomatoes website were rated as positive.

USA Today’s Brian Truitt called the three-hour film “Marvel’s glorious greatest-hits package” with callbacks to previous adventures that will thrill fans who have faithfully followed characters such as Iron Man and Thor.

“It’s also a singular, sprawling and hugely satisfying tale that begins with a brutal, emotional gut punch and takes you on quite the trip with the original Avengers crew,” Truitt said.

“Endgame” concludes a story that has unfolded over 21 previous films since 2007 and become the highest-grossing franchise in movie history. It picks up where last year’s “Avengers: Infinity War” left fans hanging when several beloved heroes appeared to turn to dust.

“The filmmakers have sought to reward movie-goers with a spectacle that’s epic in every way,” Lowry said.

“The overall journey not only produces several genuine surprises – no small feat in this context – but plenty of humor, with an assortment of lighter moments to augment the stirring and, yes, emotional ones,” he added.

A.O. Scott of The New York Times said the movie provided the “sense of an ending,” even though many characters are expected to return in future films, and “a chance to appreciate what has been done before the timelines reset and we all get back to work.”

“We’ve lived with these characters and the actors playing them for more than a decade,” Scott wrote. “For the most part, it’s nice to see them again, and a little sad to say goodbye.”

Box office experts say “Endgame” may break the opening weekend record for ticket sales in the United States and Canada, which now stands at $257.7 million for “Infinity War.”