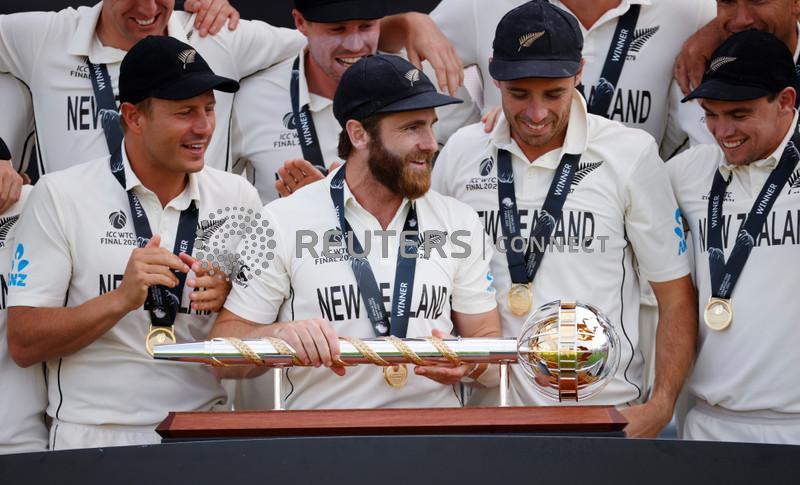 (Reuters) – New Zealand open their World Test Championship defence against India this week with an air of fatigue after a long road trip and the emotional letdown of the T20 World Cup.

Whitewashed 3-0 by India in a T20 series on the heels of their World Cup final defeat by Australia, the ‘Black Caps’ have lost that winning feeling as they head into the first test in Kanpur on Thursday against an opponent bent on revenge.

New Zealand may have golden memories of beating India in Southampton to claim the inaugural WTC trophy in June but the neutral territory of the Rose Bowl can hardly seem further away.

Without pace spearhead Trent Boult and all-rounder Colin de Grandhomme, New Zealand will face the same opponents where they have never won a test series let alone a test since the 1988/89 tour.

“You realise the enormity of the challenge ahead,” head coach Gary Stead told reporters on Tuesday.

“India are a fantastic side. They’ve got world class spinners in their environment here as well.

“(They are) one of the great challenges on the test calendar. It’s something we haven’t done for a while, we haven’t been here since 2016 but we’re certainly looking forward to what’s ahead.”

New Zealand will have only two training sessions as a full squad before Thursday, with the T20 players having rejoined the camp on Monday following the defeat in Kolkata.

A number of players are well short of match fitness, including batsman Ross Taylor and paceman Neil Wagner.

Selectors have yet to decide who will replace batsman Devon Conway for the first test after he broke his hand punching his bat at the World Cup.

“We’re as prepared as we can be in this COVID world,” said Stead.

“India are also coming off a T20 series … Hopefully for us they are in a similar boat to what we are as well.”

New Zealand’s four-prong pace attack reigned supreme in the last COVID-affected WTC cycle but the Black Caps will be unable to fall back on their traditional strengths in Kanpur and Mumbai.

They will hope left-arm spinner Ajaz Patel and offspinner Will Somerville can pressure India’s powerful batting lineup, with all-rounder Mitch Santner also likely to be on hand with left-arm spin.

Stead acknowledged New Zealand would need to manage some players carefully after their long stint on the road but said there was little time to dwell on things.

“In two weeks we’ll be on a plane home, things will happen really quickly for us,” he said. “So it’s really important that we get focused on the job and the challenge that’s in front of us.”