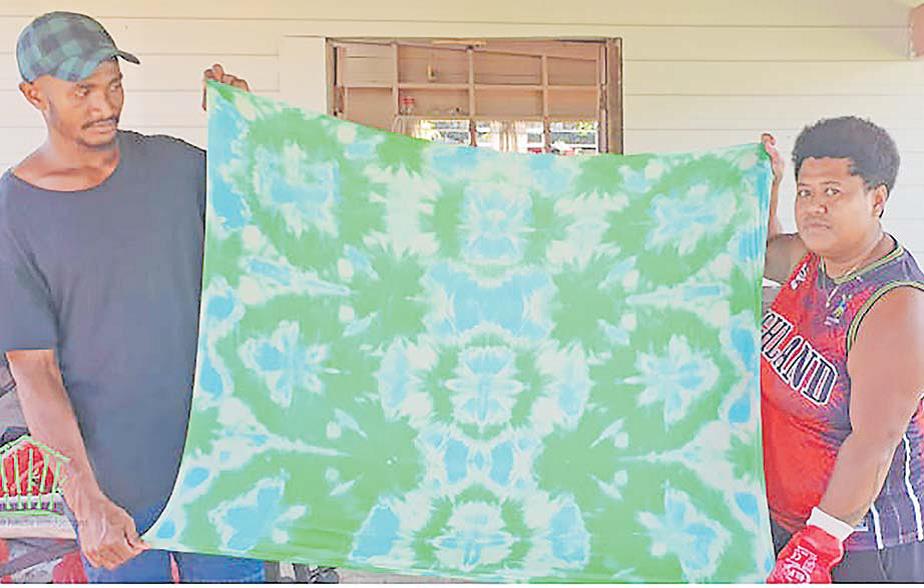 Sainiana Navuasese with one of her creative sulu design. Picture: SUPPLIED

The early ’70s and ’80s were filled with women highly skilled in traditional mat weaving and dancing.

It was a way of life back then and it still is in some parts of the country. Women at that time were creative while men did physical work.

For Sainiana Lacakavukavu Navuasese of the Naitasiri highlands her way is dyeing materials for sulu wear.

The 32-year-old of Nadakuni Village is a teacher for the past 12 years at Waldors Kindergarten School in Nasese, Suva.

Like a lot of women who turned back to their skills and talents amid the COVID-19 economical crisis, Sainiana did the same.

“When the second wave brought in lockdowns across the country it also affected my village for the past 6 months. I just stayed in the village living off the land the village way.

“When the border was lifted on September I came home to Nasese and decided to do something for the time being while waiting for schools to reopen.

Sainiana said she decided to buy some colours to dye voivoi and tried selling them.

“But it didn’t work well so I bought some material to dye and as women from the highlands we have a never say die attitude and it was then that people started buying my sulu.

“I started with sulu vakatoga. Between September and November I made 400 followers on social media. Whenever people buy 10 or more sulu I deliver it to their doorstep.

“But at the moment they come home to Nasese to buy and choose from assorted designs. At the moment the demand is up because of the hot weather. Girls are after a soft and light wear so I sell more than 100 sulu within three days.”

Sainiana said she was trying to do something unique and while dyeing her sulu vakatoga she’s always improvises with colour combinations to make them look even more attractive and more creative.

Sainiana said as an iTaukei woman in the village, she tried something new for herself while other women stuck to weaving or cooking for a living.

The former Dudley High School student said she received support from her family and friends which motivates her to move forward.

She said she worked hard because she enjoyed what she was doing for a living.

Sainiana said she planned to take her business a step up if the high demand continued and hoped other opportunities might open up for her.

She said the money she earned supported her and her family and so far everything was going according to plan.