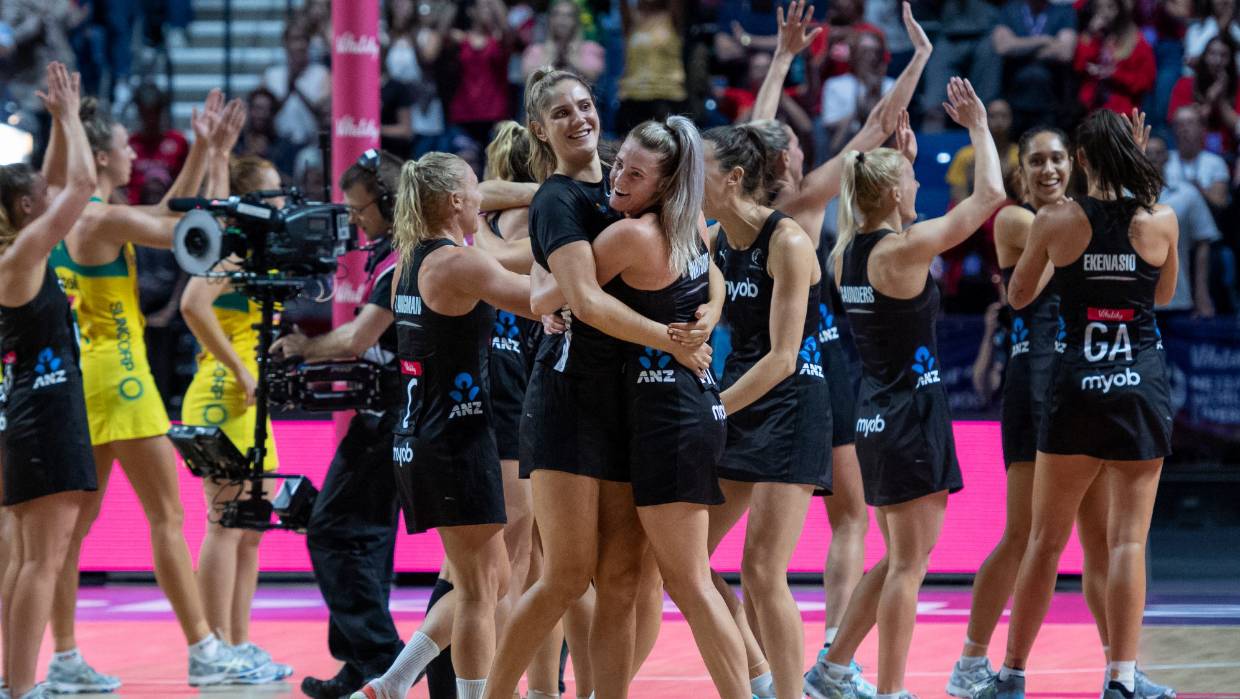 The Silver Ferns celebrate at the fulltime whistle after beating Australia in the 2019 Netball World Cup final. Picture: GETTY IMAGES.

Dame Noeline Taurua is renowned for thinking outside the box and innovative netball ideas.

It was Taurua’s brainwave to bring in the New Zealand men’s side for a warm-up series prior to the 2019 Netball World Cup, which also featured a New Zealand All Stars team and Fiji.

The Ferns lost both games against the men, but their physical playing style, height, and toughness was pivotal in preparing them for the World Cup, which New Zealand won for the first time since 2003.

Silver Ferns coach Taurua’s creative nous will be put to the test with the Covid-19 pandemic flipping her plans for the year upside down.

The Ferns aren’t scheduled to play until September’s Quad Series against Australia, England, and South Africa, with games in Auckland and Hamilton, and a further three in Australia.

Whether those games go ahead is uncertain in the current climate, as is October’s annual four-game Constellation Cup series against Australia.

Taurua, the Halberg Awards coach of the year, is in lockdown at her Pukehina Beach home, near Tauranga, in a busy bubble of 11, which includes husband Ed, their five children, and three grandchildren.

Only the opening round of the ANZ Premiership, New Zealand’s flagship domestic competition, was possible over March 15-16 before being postponed indefinitely. Whether it can resume in the coming months is doubtful.

That could mean Taurua and the Ferns selectors have one round to select from, if international games are possible later this year.

If the ANZ Premiership can’t restart, Taurua told Stuff there would have to be a clear selection process for the Ferns. Trials or a possibles versus probables game were just some of the ideas being floated.

“You want to keep everything transparent and fair. We would probably have to relook at what the selections would be, so that we ensure everyone gets that opportunity.

“I think that needs to be first and foremost and transparent. The good thing is we’ve been quite creative in the ideas we’ve been putting across.”

Should the Ferns international games be scrapped due to border restrictions and teams not wanting to travel, Taurua hoped they could still get some netball in.

One possibility was replicating last year’s Cadbury Series and involving the men again, and maybe New Zealand A.

The Youth Netball World Cup is set for Fiji next year, should the Covid-19 situation improve.

Taurua said it was important players in the New Zealand-under 21 side were being pushed.

Incorporating them could be an option too.

Netball New Zealand (NNZ) will be desperate for some form of netball for the Silver Ferns in 2020 to honour their commitment to sponsors and give key commercial partner Sky some live product.

“​I think that’s also uncertain at this stage whether there would be international [for the Ferns] and if that’s the case and we can still play netball that’s probably the biggest thing.

“Then looking at what we could possibly do within New Zealand to keep ourselves ticking over.

“This is an opportunity that could be a positive for us, not only for our sponsors, but for us as a sport to survive. It’s a great opportunity and can be very positive.”

NNZ chief executive Jennie Wyllie told Stuff  she remained optimistic the ANZ Premiership could be staged in some capacity. Working in NNZ’s favour is the competition is New Zealand-based and could be started quickly once the country is safe and restrictions lifted.

“Having the ANZ would be the ultimate, not only for the competition itself and what that means for sponsors and to be honest payment of wages and those sorts of things,” Taurua said.

“It also leads into the international series. That would be a bonus if we did have ANZ.”

Premiership netballers are in lockdown like the rest of the country and training individually in their bubbles.

In the days before the lockdown, it was a mad scramble as players transported weights and exercycles from their training venues to makeshift gyms at home.

The premiership clubs were doing an excellent job keeping in contact with their players around fitness, Taurua said.

“We’re probably really lucky where it’s a time for players to build their engine as much as possible.

“The communication has been get out there and run. Even some of it you can’t do long distances because of what’s happening or through government regulations, but there’s still the ability to get out and put a good 5kms in there from your home.”