Crane put in place to raise Danube wreck where 28 died 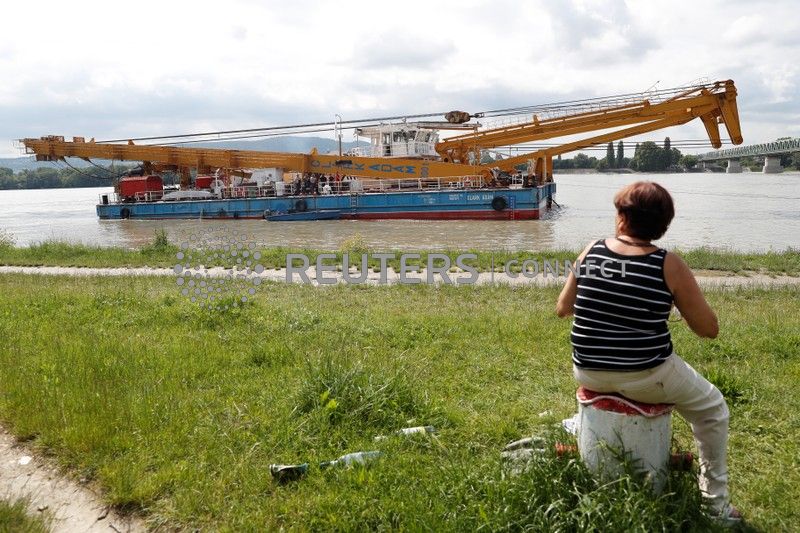 BUDAPEST (Reuters) – Crews moved a giant floating crane into place near a bridge on the Danube River in Budapest on Friday to raise the wreck of a pleasure boat that capsized and sank last week killing 26 South Korean tourists and two Hungarian crew.

Bodies of all but nine of the victims have been recovered in an intensive search up and down the Danube, after the worst disaster in more than 50 years on Europe’s longest river.

The salvage operation has been held up by flood waters and strong currents. It could yet take days before divers can finish welding hooks and inserting cables under the sunken boat to allow the crane to lift the wreck.

“Divers have been working non stop since the morning… trying to fix these ties,” Hungarian special forces spokesman Nandor Jasenszky told a briefing.

The Mermaid, carrying 33 South Korean tourists and two crew, sank after a large cruise liner struck it from behind as both vessels passed under the 19th century landmark Margaret Bridge in the centre of Budapest. The captain of the cruise liner has been arrested and denies wrongdoing.

Seven Koreans were saved and 19 bodies have been recovered so far. Among those still missing and presumed dead are the Hungarian captain and a Korean child.

“We have six patrol boats in Budapest… and a further nine downstream from the capital… all the way to the Serbian border,” the captain of the Danube Waterborne Police, Richard Prohaszka, said on Friday, describing the search for more bodies. “We use sonar, night vision equipment and canine units.”

Dogs have located three of the victims along the riverbank, Prohaszka said. The body of a Hungarian deck hand was found late on Thursday as it washed ashore near a busy Budapest embankment.

Water levels, which were unusually high due to rains and melting snow in the higher parts of the Danube basin, were receding more slowly than anticipated, the National Water Authority OVF told the state news agency MTI on Friday.