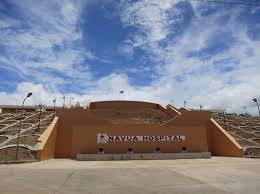 The Navua Hospital is where the three remaining patients of COVID-19 in Fiji are being kept. Picture: FT FILE

A COVID-19 patient, who is still in isolation 72 days after he was diagnosed, says the one thing he has learnt while living alone is “not to take his family for granted any more”.

The 28-year-old who is Fiji’s fourth positive case of COVID-19 said he had undergone 12 tests while in confinement and was still testing positive.

In a phone interview from his hospital bed, the Suva man who preferred anonymity said the separation from his family was unbearable.

He shared how he had advised them to visit relatives so they do not miss him while staying home.

The man said he was reading up a lot on the virus and was “fighting the system” to keep his sanity.

“I have already recovered, but the results are still positive due to the dead virus particles,” he claimed.

“I have been debating with senior doctors of their protocols and methods. That keeps me going.”

He said he whiled away his time in isolation with eating, playing games, watching videos, sunning himself, exercise and sleep.

The man contracted the virus in Sydney, Australia.

Upon his arrival into the country, he was advised by Ministry of Health staff members in Nadi to head straight home and self-quarantine.

He followed the advice and self-quarantined himself until he developed some symptoms. He said he started feeling sick, had mild sore throat and headache and was transferred to Navua Hospital when he informed medical authorities.

Fiji has recorded 18 positive cases of COVID-19, of which, 15 have recovered while three remain in isolation.