COVID-19: Japan to continue to support Fiji against virus 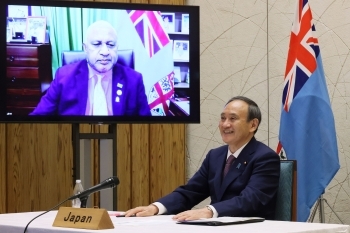 Fijian Prime Minister Frank Bainimarama had a video teleconference with the Japanese Prime Minister Suga Yoshihide on Tuesday, the Cabinet Office of Japan has announced.

Discussion on numerous issues took place in the 20 minute teleconference.

“Prime Minister Suga stated that Pacific Island countries such as Fiji are important partners to Japan, and that he would like to strengthen relations between the two countries,” states a Cabinet of Japan press release.

“He also stated that he would like to continue working closely with Prime Minister Bainimarama toward a “Free and Open Indo-Pacific.”

Mr Suga also expressed his intention to continue supporting Fiji with measures against COVID-19, provide support for the recovery from damage caused by cyclones, contribute to disaster prevention measures, and deepen cooperation in areas such as infrastructure development.

“In response, Prime Minister Bainimarama expressed his gratitude for Japan’s long-standing support. Both sides concurred on cooperating toward the success of the 9th Pacific Islands Leaders’ Meeting.”