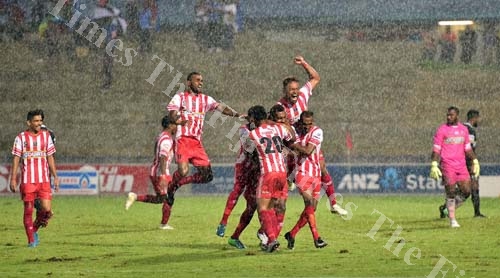 THE top four teams have secured their semi-finals spots in the 2018 Courts Inter District Championship after the final game at the ANZ Stadium in Suva yesterday.

Fiji Football Association president Rajesh Patel said the last round of games went well even though there were weather disruptions at the end of the day.

“The games had been good until the weather changed but that’s part of any sports competition,” said Patel.

“When the weather changed in this ground condition the referee took a good control of the games and people might feel that he did not control it right but if you see the replay his calls were right, and in this wet weather the players will have to adapt to it,” Patel said.

In the senior division Navua have qualified with defending champion Nadroga from Pool A while in Group B Lami and Tailevu Naitasiri have qualified for the semi-finals tomorrow.

“We are anticipating a tough semi-finals and finals,” Patel said.

“You have Suva, Labasa, Nadi and Lautoka all in from the premier division so it’s a big crowd puller for the tournament.

“We urge all the fans to come down in numbers to support our teams and we will see some good football being played.”

Labasa will face Suva at 2.30pm while Nadi faces Lautoka at 5pm in the premier semi-finals tomorrow.

In the senior division Navua will take on Tailevu Naitasiri at 10am while Lami will face Nadroga at 12 midday at the ANZ Stadium.