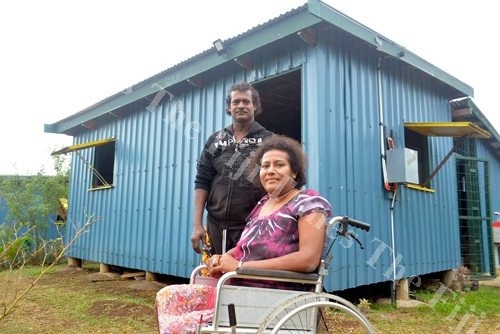 Neelmani Pillay (on wheelchair) with her husband Uma Prakash Chandra in front of their home at Koroipita settlement outside Lautoka. Picture: BALJEET SINGH

NEELMANI Pillay grew up at Nakavu, Nadi without any idea her future was going to be tragic.

She was just a plain Nadi girl who enjoyed life to the fullest and had also enjoyed school with a dream that she would succeed and become a better person.

However, her life took a twist upon giving birth to her son some 20 years ago and since then, she has had to juggle the life of being a single mother.

And it was never easy as it seems because natural disasters have always taken its toll on their family home at Nakavu.

The cyclone season would always be a time for her family to always be on the lookout as the house always gets flooded and such was life for Neelmani for the past 43 years.

But she never gave up, she held on tight to the saying that there was going to be light at the end of the tunnel.

And she found this light some years ago when she met her husband Uma Prakash Chandra who agreed to start a new life with her and her only son.

This was where they decided they would find a place where they would be safe, away from flooding which has been part of their life for many years.

Tragedy struck the family again some five years ago when Neelmani’s leg was amputated a few years after the birth of their daughter as a result of diabetes.

Her husband decided to seek assistance so he started looking for opportunities and for places where they could live happily. They finally found peace upon being given a new home at Koroipita Settlement outside Lautoka.

“We want to thank Peter Drysdale for giving us this new lease of life,” Ms Pillay said.

“Life has always been a struggle for many years and we have always wanted to move away from Nakavu because we have lost many of our household belongings to flooding.

“Now in Koroipita, we do not have to worry because we live in a decent house which has everything we need and we are so blessed to be part of the Koroipita family.”

During the weekdays, her husband would stay at home while their daughter goes to school. He works only on the weekends when their daughter stays home with her mother.

The family survives on government’s Social Welfare assistance and Neelmani sells a few food items and snacks at home which helps them with whatever they need throughout the week.

The family pays $8 a week as their house rent and at the same time adhere to the settlement rules and conditions. During this dry season, the family weren’t able to utilise their back yard gardening so they rely on their canteen a lot.

Their planting season begins in November and seedlings are always provided by the management of the Koroipita Settlement. Koroipita is home to about 1000 people living in comfortable two-roomed houses with amenities.

Conceived, developed and maintained by Peter Drysdale and his loyal crew, including residents, and many overseas volunteers, Koripita is a life-giving community and an outstanding model of how a good quality of life can be provided for such large numbers of underprivileged people.