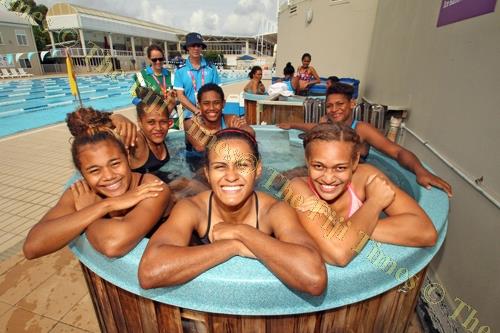 Members of the Fiji Pearls netball side cool off after a training session in Gold Coast, Australia yesterday. Picture: ELIKI NUKUTABU

THE Fiji Pearls will try and contain Jamaica which will have a height advantage when they meet in Pool A of the netball competition at the 2018 Commonwealth Games in Gold Coast, Australia.

However, Pearls coach Vicki Wilson has mapped out plans and strategies to counter their opponents. She plans to focus on retention of possession and maximising on scoring opportunities.

“The girls are very excited and it was quite overwhelming staying in the Games Village,” she said.

“We had some areas of concerns and the girls have worked hard in training for the competition.

“We are looking forward to individual improvements in the match.”

The players had their final training run at the Runaway Bay Indoor Stadium which is about 45 minutes away from the Games Village. Wilson had not decided on her starting line-up and she was expected to name the run-on side this morning.

“Jamaica are terrific competitors and they have shown a lot of good netball and showed great determination defensively,” Wilson said.

“Jamaica has knocked off top teams in the world and they are travelling fast towards the gold medal match.

“They have got players with heights all over the court. They have a centre who is 182 centimetres tall and it is the height which is physically imposing. It is going to be a big challenge for us. We have to keep possession and give every opportunity to the shooters to score.”

Close to 500 under quarantine, confirms Ministry