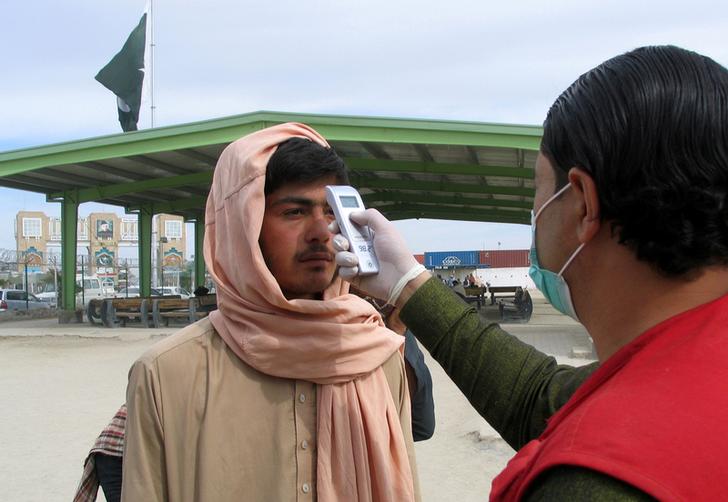 A health worker takes the temperature of a man, who returned from Afghanistan, for a medical observation as a preventive measure following the coronavirus outbreak, outside a medical camp set up near the Friendship Gate, crossing point at the Pakistan-Afghanistan border town of Chaman, Pakistan February 26, 2020. RREUTERS/Saeed Ali Achakzai

SHANGHAI/SEOUL (Reuters) – The number of new coronavirus infections inside China – the source of the outbreak – was for the first time overtaken by fresh cases elsewhere on Wednesday, with Italy and Iran emerging as epicenters of the rapidly spreading illness.

U.S. health authorities, managing 59 cases so far – mostly Americans repatriated from a cruise ship in Japan – have said a global pandemic is likely.

U.S. President Donald Trump, seeking to calm markets and an increasingly worried public, said in a live broadcast that the United States was “very very ready” to face the virus threat and that Vice President Mike Pence would be in charge of the national response. It was one of just a handful of times that the president has appeared in the White House briefing room.

Stock markets across the world have lost $3.3 trillion of value in four days of trading, as measured by the MSCI all-country index .MIWD00000PUS. [MKTS/GLOB]

Wall Street reversed earlier gains on Wednesday afternoon and oil prices dropped to their lowest level in over a year, spooked in part by health officials saying dozens of people who had been in China were being monitored in suburbs of populous New York city – although no confirmed cases have been found.