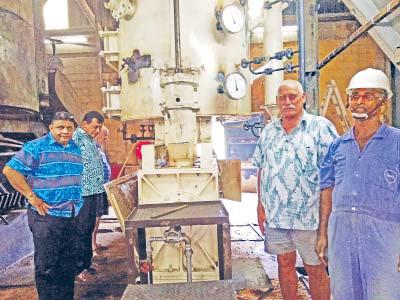 Copra Millers Fiji Ltd board chairman Raj Sharma, left, with board directors and workers at the mill in Savusavu. Picture: SERAFINA SILAITOGA

“That’s a big improvement considering that all the copra farms in our areas of supply were not spared by Severe TC Winston and farmers including us had to start all over again.

“So in 2018, we have made progress as Government stepped in with subsidies, we had our own cost-cutting measures, driving efficiencies and all these helped us recover.”

However, this is yet to be confirmed but his assumption has been based on products manufactured by the company in Savusavu.

“Severe Tropical Cyclone Winston had a major impact on the industry and the interest from farmers was also affected.

“We lost out a lot of copra, especially on outer islands, and supply was low after the cyclone.

“But through Government’s subsidies and other incentives, we have picked up again and are on recovery mode.”