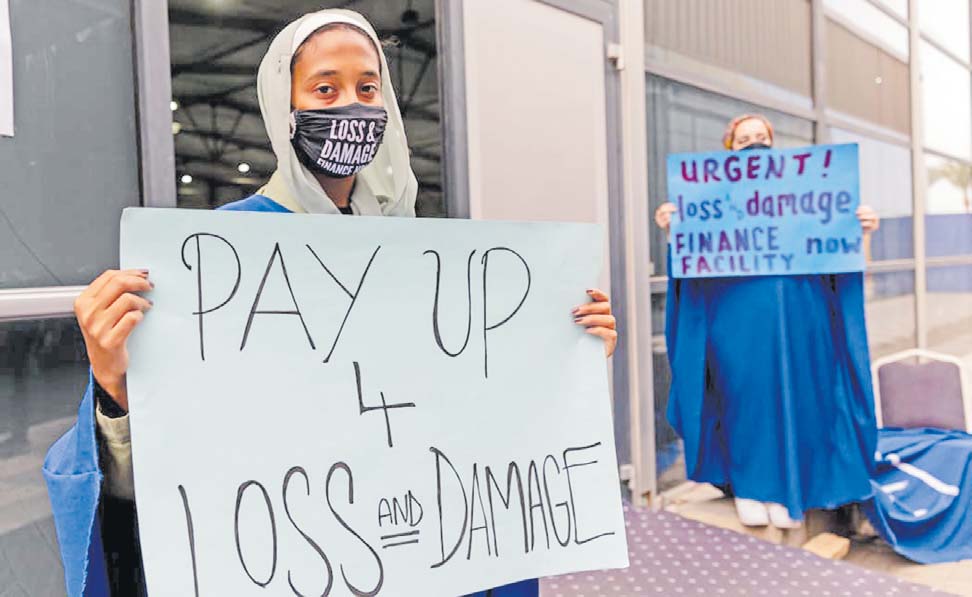 A protester makes a point to delegates at COP27. Picture: DOMINIKA ZARZYCKA/ AFP via RNZ

After two weeks of negotiations at the climate talks at an Egyptian resort, it’s now down to the wire. Diplomats have created proposals on the controversial loss and damage agenda that will be decided upon by politicians.

Robust discussions have seen many collaborations and discord resulting in negotiators not reaching agreement on funding that would see vulnerable countries compensated for climate change-fuelled disasters caused by developed nations.

A key milestone was reached on Friday (November 18), when the European Union shifted its position to support the G7 and China which includes Alliance of Small Island States (AOSIS) and the Pacific.

The EU along with the United States pushed back this agenda as it feared being put on the hook for payments of billions of dollars for decades or even centuries to come.

However, developing nations and their allies have been able to stir up support, with major voting in favour for the setup of a loss and damage facility.

Australia has chosen to keep the discussion open while the US maintained an isolated position, showing no flexibility.

The Pacific through the G7 and China has stressed the urgency of establishing a loss and damage framework at COP27.

Samoa Prime Minister Fiame Naomi Mataafa called on the nations to place the same level of global urgency as seen for the COVID-19 pandemic to meeting the 1.5 Celsius degree pathway.

Ms Fiame said more action was needed on upscaling ambition on funding for loss and damage and must remain firmly on the table as nations continued to witness increasing occurrences and severity of climate change impacts everywhere. Option one also entails need for loss and damage to be a separate funding from adaptation and mitigation.

Fiji’s permanent representative to the UN, Dr Satyendra Prasad, explained there were gaps in trying to conflate the funding intended for other purposes with compensation as they were not the same thing.

Dr Prasad said vulnerable people in the Pacific “are facing the loss of livelihoods, of land and of fundamental cultural and traditional assets”.

These were non-economic losses that could not be compensated through adaptation and mitigation funds. Financial support for loss and damage must be additional to adaptation funding but also differently structured.

Option one calls for existing funding pledges to be made operational in the interim for vulnerable nations.

Pacific’s advisor for loss and damage Daniel Lund said when responding to damage caused by extreme weather events, finance needed to be available at short notice.

Mr Lund added that current funding available was for project-based support under the Green Climate Fund which took around one year from proposal submission to receiving the first disbursement of funds, “Something like that doesn’t work when the loss and damage are immediate.”

He pleaded with parties to understand the Pacific’s situation as it was a matter of life and death and their very existence depended on it.

“How do I explain to young kids in Palau, the children who live on that atoll, that their homes have been damaged by typhoons and we have to rebuild them over again and again? If they ask me why is it a recurring situation, what do I tell them? Who do we blame?

“Our islands, our oceans are our culture, it’s our identity in this world. I’m sure our developing countries share the same concerns and this is why we are asking them to help.”

Kicking the can down the road

Australia and the US have put forward options two and three for consideration.

They propose a soft power influence. They are proposing more time be given to iron out the finer details to establish a loss and damage finance in COP28 and operationalise the funding by COP29 in 2024.

The Sydney Morning Herald reported Climate Change and Energy Minister Chris Bowen said, “the world is unlikely to come to an agreement at COP27 over contentious calls for wealthy nations to pay loss and damage compensation to developing countries.”

He said, “let’s just see how the internal discussions go. But I mean, I doubt very much it’ll be a full agreement on that at this COP”.

The two countries who have spent time in the wilderness of climate diplomacy, have also proposed developed nations continue to tap into climate funding made available through bilateral and multilateral arrangements.

This proposal also suggests that any funding made available for vulnerable states can be channelled through developed nation governments, proposing it does not need to be faciliated by a governing body like the United Nations Framework Convention on Climate Change.

The Pacific feels this is problematic. Pacific negotiator Sivendra Michael explained. “This is volatile as it depends on the government of the day.”

Time reports US climate envoy John Kerry said, “We have to find a way for more capital to flow into developing countries.”

Kerry added, “I think it’s important that the developed world recognises that a lot of countries are now being very negatively impacted as a consequence of the continued practice of how the developed world chooses to propel its vehicles, heat its homes, light its businesses, produce food.

Much of the world is obviously frustrated,” Mr Kerry said in an interview in October.

While the US allowed loss and damage finance to be added to the meeting’s formal agenda for the first time, it took the unusual step of demanding that a footnote be included to exclude the ideas of liability for historic emitters or compensation for countries affected by that pollution.

• The views in this article are hers and not necessarily of this newspaper.