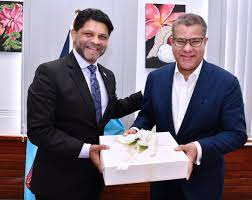 Mr Sharma said it was imperative to deliver on the commitment to double adaptation finance to $40 billion by 2025.

“Because we all know that we need a radical step change in delivery and that is why I’m continuing to urge all the private finance providers including the multilateral developments banks,” he said.

Mr Sharma said he is going to convene them next week to set out clear and ambitious adaptation finance targets by COP27.

“And all climate finance providers should align with the principles of the task force on access to climate finance, which Fiji and the UK jointly chair.

“That task force is plainly a country trials here in Fiji, as well as in Bangladesh, in Jamaica and Rwanda and Uganda are underway and they are there to prove that money can be made accessible and then it can support national priorities, not just those decided from afar.”

He said they continued to engage with a diverse network of youth, indigenous people and civil society organisations because those already living with historic forms of inequality were more vulnerable to the impacts of climate change.

“So many young people, including my own daughters are relentless in reminding us all of what is at stake.

“And indigenous peoples are stewards of 80 per cent of the world’s remaining biodiversity, are indeed powerful leaders in our work to develop nature based and resilient climate solutions.”