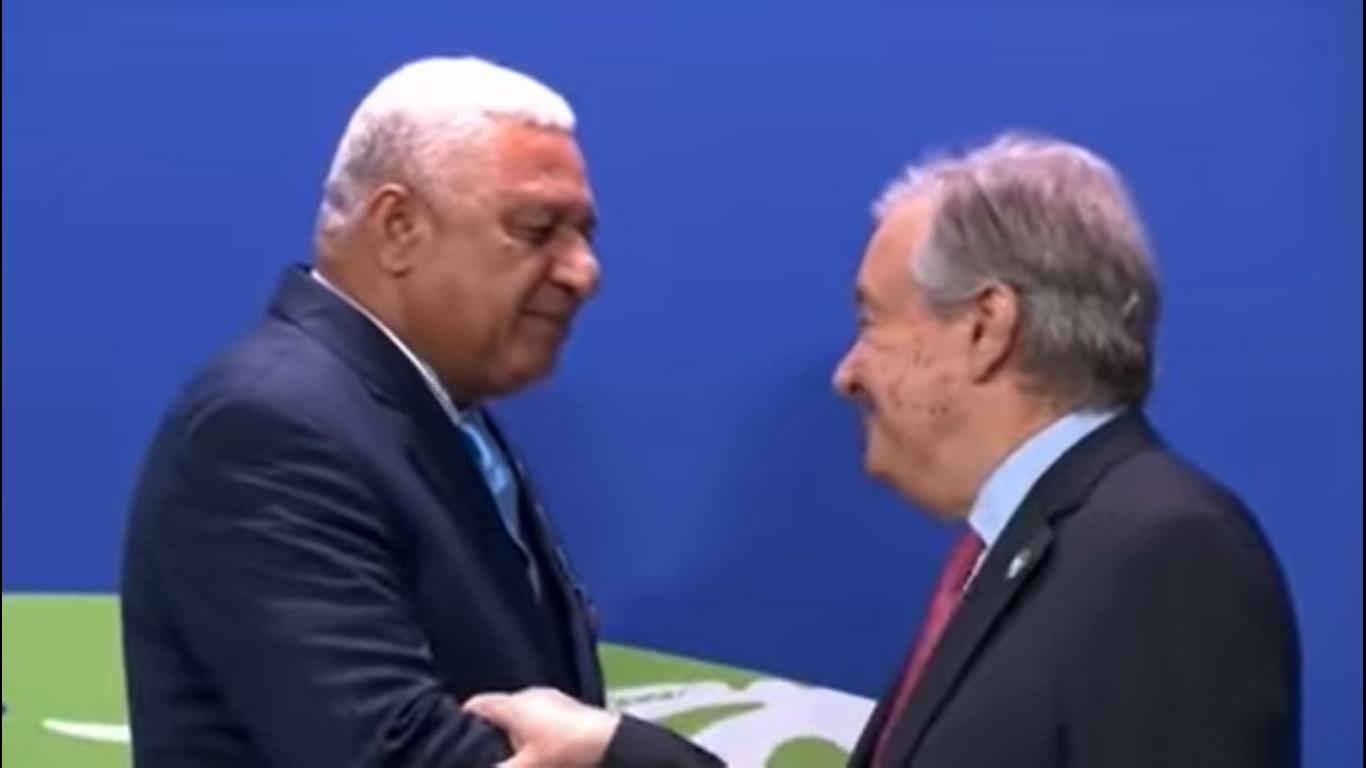 Fijian Prime Minister Voreqe Bainimarama did not mince his words when he addressed the COP26 Leaders Event themed on action and solidarity, calling out the ‘wilful ignorance’ in meeting emission reduction targets and climate finance pledges.

In his remark, Mr Bainimarama brought to mind the Fijian doubled-hulled sailing canoe – the Drua – that Fiji displayed at the COP23 in Bonn – in that it was a symbol of the message of solidarity that everyone is in the same canoe when it came to climate change.

He said today, the ‘global canoe’ was headed for storms that would sink it “while seawater pours aboard through massive gaps; gaps in ambition, gaps in climate finance, and gaps in emissions reduction commitments”.

He noted an ancient adage – one he said he had added to Fiji’s call to action – ‘tu na i nima, luvu na waqa’, which quite literally meant “the boat sinks despite the presence of the bailers”.

“Island nations, like Fiji, have teaspoons with which to bail water. The G20 nations have buckets,” Mr Bainimarama said.

“Yet too many are wilfully ignoring the storms on the horizon and the holes in our canoe. They must cut emissions – now – to set our canoe towards the calm of carbon-neutral seas and they need to start bailing – now – by meeting their climate finance pledges before our canoe sinks to the seabed.”

The Fijian PM said that while they welcomed the new Climate Finance Delivery Plan on Meeting the US$100billion goal by 2023, they did so knowing those nations had fallen billions short of previous pledges.

He said despite being the most climate-vulnerable nations in the world, SIDS had accessed a mere 2 per cent of the available finance, which had mostly been through loans.

He added that forced small island developing states to pay high-interest rates to address climate-driven impacts, which he claimed they did not cause.

“Wealthy nations must do more than pledge finance, they must make it affordable and accessible, and they must actually ensure that it reaches the communities it’s meant to aid – for mitigation, but mainly for adaptation purposes.

“This COP is where we will choose to stay with 1.5 or lose it forever and it is where we decide whether we are with the young and future children of the world or we are against them.

“To all leaders here; the message of the Pacific is simple: Our canoe is sinking. Pick up your buckets and start bailing, now, before it’s too late.”