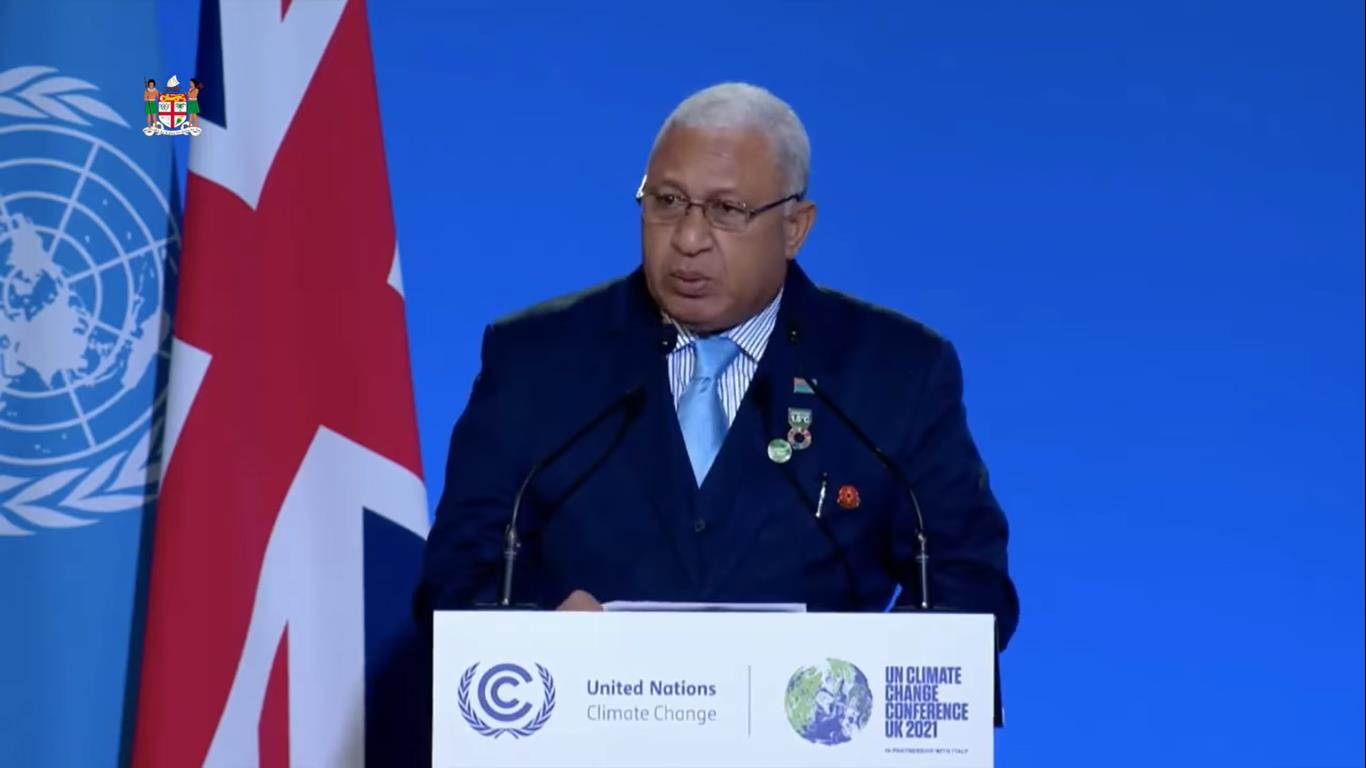 Fiji’s Prime Minister Voreqe Bainimarama says the world cannot let ‘a coalition of carbon addicts’ write out the urgency of accelerating climate action for the survival of low-lying island nations and communities.

In his address at the COP26 climate conference in Glasgow, Scotland, Mr Bainimarama said at COP21 in Paris, ‘1.5’ (global warming limit target) was a compromise that Fiji struck alongside all of the world’s most climate vulnerable nations.

He said they knew then all the human tragedy that level of warming would mean, but it would also ensure that, at the very least, low-lying island nations and communities would survive.

“Six years on, where has that goodwill gotten us? The world’s collective climate commitments will see us fly past 1.5 by the end of the decade. We are losing the race to net-zero to a coalition of carbon addicts who would rather fight for coal than for a future of good jobs and innovative industries created by climate ambition,” Mr Bainimarama said.

“These leaders make pledges but won’t show us plans. They even seek to spin the science. But we cannot let them write out the urgency of accelerating action.

“Clean coal, responsible natural gas, and ethical oil are all figments of the selfish mind. No matter what they call them, carbon emissions are wrecking the climate. There’s nothing clean, natural or ethical about it.”

Mr Bainimarama claimed other leaders pursued a “policy of appeasement”.

“They sit idly by as their high-emitting counterparts destroy our children’s futures.

“The science is clear, ladies and gentlemen, no city, no community, and no ecosystem will be spared from the reckoning that lies beyond 1.5 degrees of warming, including our oceans, the lungs of the planet.”

Mr Bainimarama said the delegates from Pacific nations had not travelled to the other end of the world to “watch our future sacrificed at the altar of appeasement of the world’s worst emitters”.

He said the existence of low-lying neighbours was not on the negotiating table.

“1.5 is alive. It is possible. Humanity does not lack the resources, technology, projects, or innovative potential to achieve it.

“All that is missing is the courage to act – the courage to choose our grandchildren’s future over shareholder greed and corporate carbon-driven interests.

“What more fitting place than the United Kingdom – the birthplace of the industrial age – to summon the will to secure the commitments that begin a cleaner, greener and bluer revolution.”