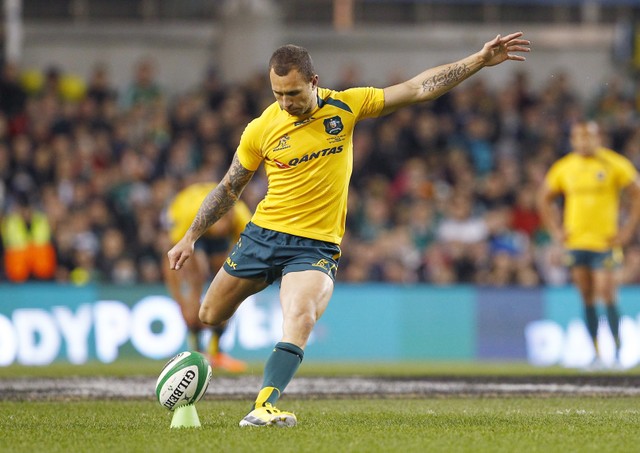 The 30-year-old had been expected to bring an end to his 12 years at the Queensland Reds after being frozen out by coach Brad Thorn last season.

The move reunites Cooper with scrumhalf Will Genia in a halfback combination that played a significant role in helping the Reds to a maiden Super Rugby title and Australia to the semi-finals of the World Cup in 2011.

“I’ve obviously chatted to Quade a lot over the last few months and I’ve been impressed by his love of the game, and his willingness to reflect on his journey,” said Melbourne coach David Wessels.

“He’s been pretty selfless in his commitment to club rugby in Brisbane and has shown patience and maturity.

“He knows that he has some hard work ahead of him, but he has the potential to be a really important spark for us over the next few months. We’re excited to have him.”

While one of the most skilful players in Australian rugby, there have always been question marks over Cooper’s temperament and maturity – not least when he was bracketed with James O’Connor and Kurtley Beale as the “Three Amigos”.

Thorn’s decision not to call him up to the Reds side even when injury reduced his options to one inexperienced flyhalf last season was regarded as a clear statement of the former All Blacks’ determination to clean up the culture at the franchise.

Cooper reacted with dignity to his internal exile and committed himself to club rugby in Brisbane while refusing any offers to break his contract with Queensland.

He broke his silence on Instagram on Monday, posting a picture of himself fending off Thorn during a test between Australia and New Zealand.

“Sometimes you are forced out of the place you love but thank god there’s more than one place that loves me,” he wrote alongside the picture.

His lack of Super Rugby curtailed his test career and he has not played for Australia since winning his 70th cap as a replacement against Italy in last year’s June test series.

Cooper will be hoping that linking up with Genia and another Rebels recruit, Wallabies centre Matt Toomua, might earn him a chance to resurrect his career in time for next year’s World Cup in Japan.