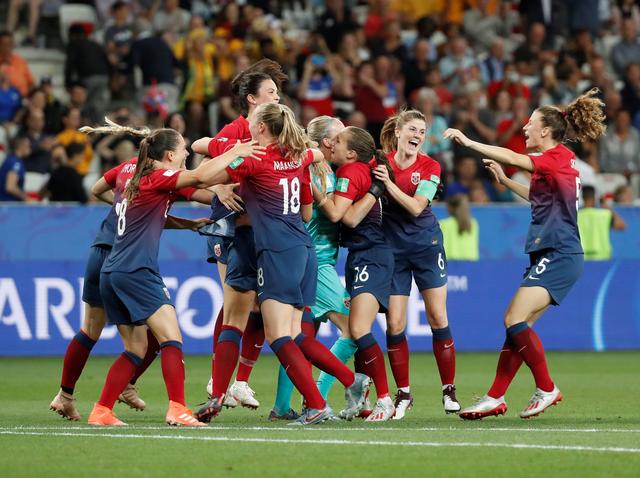 NICE, France (Reuters) – There was a sense of inevitability for Norway as they rallied together ahead of the penalty shootout that sent them into the quarter-finals of the women’s World Cup following a 1-1 draw with Australia on Saturday.

Norway had the best chances in the match and came close during extra time after Australia’s Alanna Kennedy was sent off.

“It was this really nice feeling of confidence in the group. To be honest it looked like we hadn’t done anything other than penalties our whole life,” Norway’s Caroline Graham Hansen told reporters.

“It was really controlled and a fantastic team effort on the shootout.

“(Coach) Martin (Sjogren) just said to us that no matter what happened out there now, we do this together and it doesn’t really matter because we’d done a fantastic job so far,” she added.

“Really that was the point of no return because everybody just relaxed, went out there and did their job.”

Norway won the shootout 4-1 after Sam Kerr skied her effort over the bar and Emily Gielnik had her attempt parried by Ingrid Hjelmseth.

“It was hard to create chances when we went down to ten with Sam (Kerr) isolated up front.”

Australia coach Ante Milicic would not blame Kerr for her missed spot kick.

“Only big players can miss penalties, because small players don’t take them,” he told a news conference after being asked what he told the captain.

“I don’t know if there are any words to describe how I’m feeling but, more importantly, how the girls are feeling.

“What I will say is that I’m extremely proud of them and it’s been an honor to work with this group, they’re a special bunch of girls and they’ve grown ever so close to me – I’m disappointed that I couldn’t help them realize a dream that they’ve been waiting for for a long time.”