Cook Islands MPs to face off in public 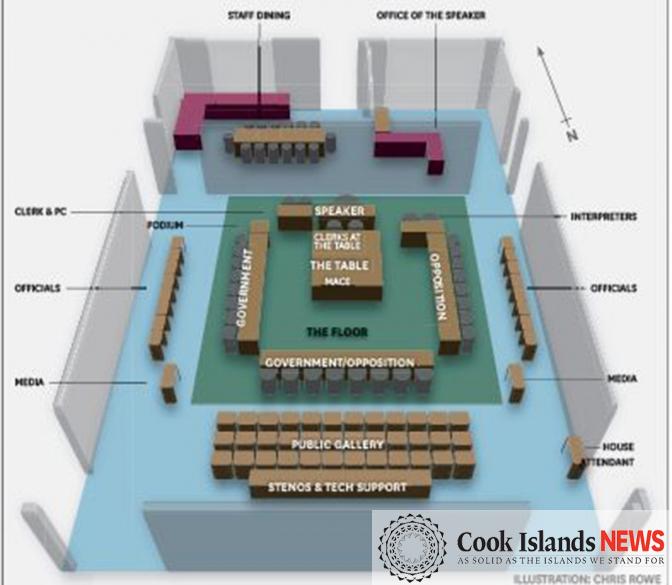 There will be far more seats in the public gallery, opening the MPs up to scrutiny from curious locals. Picture: COOK ISLANDS NEWS

Parliament has been gutted for a rebuild replicating the adversarial face-off of overseas legislatures.

Cook Islands News has obtained plans for the new debating chamber, in which government and opposition MPs will go head-to-head in debates.

There will be far more seats in the public gallery, opening the MPs up to scrutiny from curious locals. There will be space behind MPs for government and opposition officials to offer their advice.

And like the UK Parliament, a large Mace – an old-fashioned battle club – will be laid in the centre to remind MPs of the Speaker’s authority.

The new U-shaped Chamber is scheduled to be completed in October, in time for the next Parliamentary session.

But for MPs who are smokers like minister Georgie Maggie, there is no place to go in the new building. It has been declared a non-smoking zone.

Clerk of Parliament Tangata Vainerere says the reason behind not allocating a space for smokers is because they do not want to encourage the habbit in Parliament.

The introduction of the Mace would be one of the major features in the new Chamber, Vainerere said, symbolically reinforcing Speaker Niki Rattle’s authority.

“When the Speaker comes in the House, the Mace is brought before her and when the Mace sits on the stand, it means the Speaker is in charge of the House.”

The Mace will sit on a central table, its crown always pointing to the government side of the Chamber.

“We are going to open up the walls and go outwards towards the beach side,” Vainerere said. “We have added 36 seats for the public gallery instead of the current eight, so that would give an opportunity for the kids who can come in their class and they all can go inside at once.”

The new Chamber will also have a dining space for the staff and a decking area for MPs to enjoy their lunch outside on a sunny day.

Vainerere will meet with the building experts to discuss the plan and decide on the contractor undertaking the project.