Cook Islands Games to return in 2022 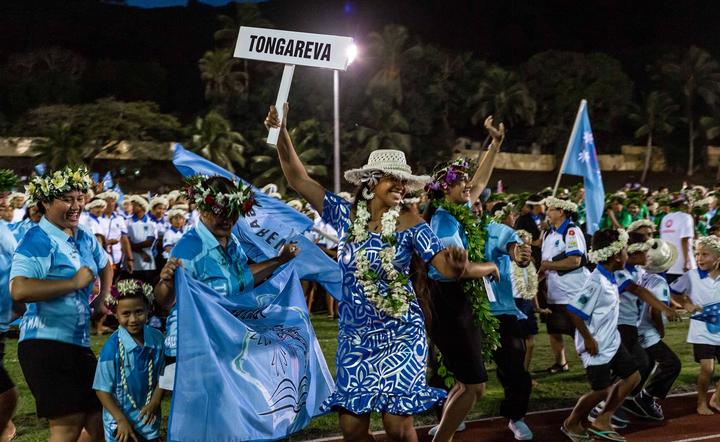 The Cook Islands celebrate the success of the event at the 2020 closing ceremony. Photo: Bank of the Cook Islands/ Creators Hype Digital Media Agency

The revived Cook Islands Games will be back in 2022, after staging the biggest event in the Pacific this year.

The multi-sport event returned for the first time since 2015, as a way to bolster sporting competition in the country in the wake of the Covid-19 pandemic.

Almost 4,000 locals took part in the event, either competing on the field, officiating or volunteering off it.

The sporting smorgasbord is being credited for exposing a heap of new talent that can boost the country’s performance in international events.

President of the Cook Islands Sports and National Olympic Committee, Hugh Graham, said it proved the island nation could compete at any level.

“We have seen some great sporting performances, we have seen national records broken, we have seen new stars emerging. Thank you for proving that we are a very good sports nation with a part to play on any international stage,” he said.

“CISNOC will continue to advocate this event, even after we extinguish the games.”

Graham said the Games had also helped connect with Cook Islanders around the world.

“The Games and the way we have applied them has shown how sports brings people together, especially in this fragile world that exists today.”

“Social media has enabled our people overseas to see these Games. 54 thousand people viewed our opening ceremony alone on social media. We have brought together 11 islands, 24 national federations, and over 3000 athletes.”

After 17 days of intense competition across 25 sports, Mauke was declared the champions of the 2020 Games.

The southern island finished with 118 points, just two points more than Aitutaki and Mangaia who finished second equal on 116.

“This was a world class effort from the people of the Cook Islands, for embracing, for owning and for making these Games the spectacle that we have witnessed over past two weeks,” he said.

“I am very pleased to announce tonight, that the government is committed to supporting the next Cook Island Games in two years time.”

“All the athletes, both young and old, professional and beginners, winners and place getters – because there are no losers in the Cook Island Games – the class and magnitude of these Games has been impressive and together as one, we have moved our nation.”

The Prime Minister said some atheletes discovered in the last two weeks could represent the country in the next Pacific Mini Games, which has been rescheduled for June 2022.

“From the many of you here tonight, a few will be called to carry our flag, to wear our Cook Island colours, to represent us in foregn lands. As a government, we will continue to support you to do this,” said Brown.

“I hope you and others will continue to pursue your sporting abitions at whatever level that may be and be inspired to play even better.”

The Cook Islands’ top athletes will also have next year’s Tokyo Olympic Games to look forward to but for the rest of the country the countdown to 2022 has already begun.