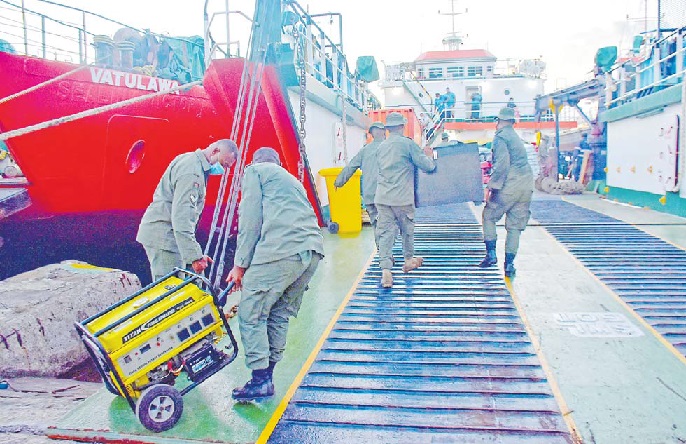 Soldiers load equipment on to a government vessel heading for the Lau Group at the Port Muaiwalu in Suva on Thursday. Picture: SOPHIE RALULU

Australian High Commissioner to Fiji John Feakes extended his well-wishes to a government contingent dispatched to the Lau Group on Thursday evening.

The team led by the Office of the Commissioner, Eastern Division, included 25 soldiers.

“It was an honour to help send off the MV Iloilovatu and MV Veivueti which departed for the Lau Group with relief supplies and disaster response experts to support those communities affected by the tsunami and tidal surges caused by the Tongan volcanic eruption,” he said.

“Australia is pleased to be supporting this important effort.”

Acting Prime Minister Aiyaz Sayed-Khaiyum had earlier announced that two joint government teams would depart for a six-day deployment to the Lau Group in the aftermath of the Hunga Tonga-Hunga Ha’apai volcanic eruption in Tonga last week.

The two teams will be visiting the islands of Moala, Vanuabalavu, Lakeba, Vatoa, Moce and Ono-I-Lau where villagers reported damage as a result of the tidal surges.