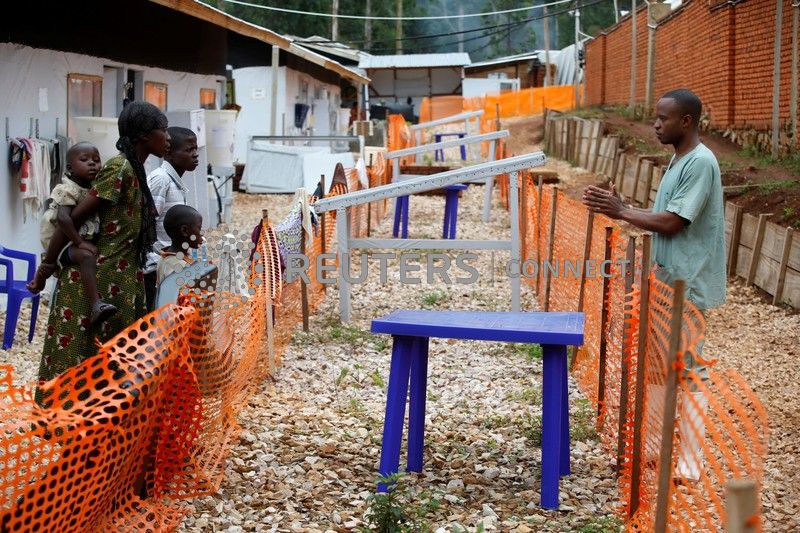 Health workers told him he had Ebola but his first thought was for his sister who had been battling the virus.

“How is my big sister doing?” he asked health workers again and again at an Ebola treatment centre on the outskirts of Butembo, a major trading hub set amid volcanic hills in eastern Democratic Republic of Congo.

Staff said they didn’t have the heart to tell him that 9-year-old Lareine had died.

“His sister was his best friend,” said Desy Shabani, who provides psycho-social support to the patients. “To have lost the dearest person in his life . . . I asked myself, ‘What will this child do?'”

The Ebola outbreak in Congo – the second-largest on record – has inflicted an unusually heavy toll on children. More than a quarter of the confirmed and probable cases identified as of early April were children under 15, compared to 18% in the last major outbreak in West Africa in 2013-2016, according to figures compiled by the World Health Organization.

The disease can progress rapidly, crippling the immune system and shutting down vital organs.

Young children and babies are especially vulnerable. Their small bodies are less well equipped to cope with extreme fluid loss brought on by common symptoms such as diarrhoea, vomiting, fever and bleeding, said Daniel Bausch, an infectious disease specialist at the London School of Hygiene and Tropical Medicine.

More than two out of every three children infected in this outbreak have died compared with just over half the adults, the WHO said. As of May 26, the death toll stood at 1,281 people, including at least 541 who were under 18.

Fatality rates are highest for children under 4 who died at a rate of around 80% in West Africa, according to a study published in the New England Journal of Medicine in 2015.

The contents of the storage room at the Butembo treatment centre attest to the age of many of the patients. Alongside blankets and spare clothes stand shelves full of baby formula and rose-coloured plastic rattles in the shape of little bears.

In the city centre, small coffins wrapped in flowery plastic were stacked outside a carpenter’s shop. An employee lamented the frequency of orders.

Ebola cases would typically be divided more or less equally between male and female patients. But in this outbreak, women and girls account for 58% of cases, down from a peak of 62% in December, the WHO said.

The reason more women and children have fallen sick remains a bit of a mystery. But experts suspect it may be because the Beni area, where the outbreak began in August, was also battling malaria at the time.

Malaria can cause severe complications in pregnant women and children, requiring treatment at medical facilities where they risk exposure to undiagnosed Ebola patients, said Mike Ryan, who heads the WHO’s health emergencies program.

“Transmission within the healthcare setting has been a major factor driving this outbreak,” Ryan said. “Unfortunately, women and children have been the unwitting victims of that reality.”

Healthcare standards in Congo vary widely due to lack of oversight over a system that includes many unregistered private clinics and traditional healers operating out of their homes.

The virus is transmitted through contact with infected bodily fluids. But health workers operating outside of government hospitals do not always follow guidelines to prevent cross-contamination, according to Congo’s health ministry.

Anselme Mungwayitheka said he and two other health workers at a private clinic in Beni caught Ebola from a woman and her newborn who were infected while in the care of a traditional healer.

“We didn’t have much equipment in this facility,” said Mungwayitheka, who now works at an Ebola treatment center in Beni he credits with saving his life. “When we received patients, we just had to put on protective gloves. After caring for them, we had to remove the gloves, but the patient had touched almost all the doors.”

A key part of the Ebola response effort involves decontaminating health facilities, educating health workers on how to protect themselves and their patients, and persuading residents to seek treatment at specialized centres. But these efforts have been hindered by outbreaks of violence and a deep mistrust of outsiders.

This is Congo’s tenth Ebola outbreak, but it is the first in the densely populated provinces of North Kivu and Ituri, where militias carry out sporadic raids from hidden strongholds in the tropical forest. Women and children are often the first to be displaced by the bloodshed.

‘ALL OF THEM COULD HAVE DIED’

At the Ebola treatment center in Beni, a city of several hundred thousand with close ties to neighbouring Uganda, five members of the same family of farmers were being treated for Ebola in late March. Three were children.

Marcela Kaswera, 45, said she had sent her children to their older brother in the village of Biakatu after their hometown of Oicha was attacked by members of an Islamist militia.

“On March 20, it was a Wednesday, my son called me,” Kaswera recalled. “He said, ‘Mama, I’m coming back to Oicha because Ebola has touched Biakatu, and many people are dying.'”

When they returned, her 7-year-old son was feverish. He died in her arms at a hospital, where he posthumously tested positive for Ebola.

In quick succession, Kaswera’s 13-year-old son, 2-year-old daughter, grown-up son, daughter-in-law and grandson all developed symptoms of the virus and were transferred to the treatment center run by the Alliance for International Medical Action.

“Now I can thank God because they are stable,” said Kaswera, who had travelled 30 kilometres (19 miles) on the back of a motorbike taxi with her husband to visit their sick family members. “If it was just me without doctors I think all of them could have died.”

On the evening of Feb. 27, unknown assailants attacked the center in Butembo where Kennedy was being treated, setting fire to some structures and vehicles. Hearing gunshots, one of the other patients took the boy and fled through open fields into the city. They spent the night at the man’s home and returned the next day.

“He was really scared,” recalled Shabani, standing on a walkway outside a line of tented cubicles, where people with suspected Ebola waited for test results.

Kennedy was discharged less than a week later. He is now back at school and plays football with a gaggle of children on the steep, muddy streets near his home, bordering lush farmland.