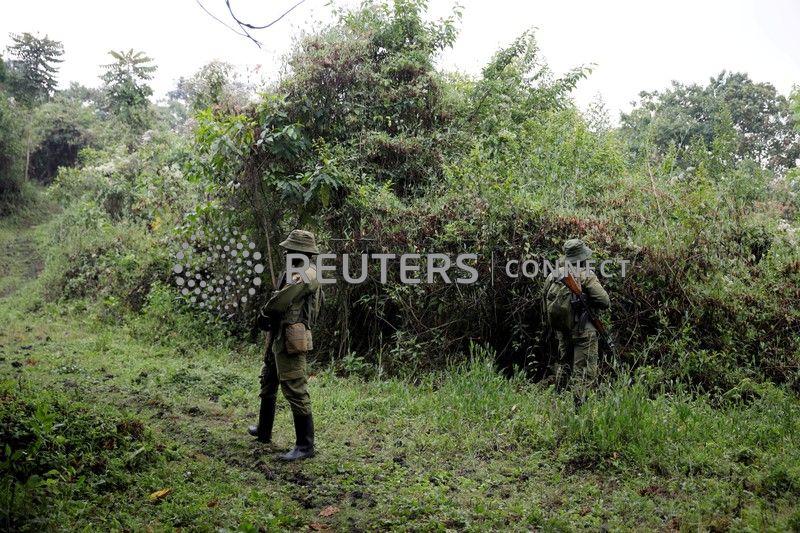 KINSHASA (Reuters) – Park rangers in eastern Democratic Republic of Congo have arrested a militia leader and alleged ivory trafficker whose fighters are accused of killing 19 rangers, authorities said on Thursday.

Jackson Muhukambuto, a former army officer who has led various militias in and around Virunga National Park, was detained in the city of Butembo on Tuesday, the Congolese Institute for Nature Conservation (ICCN) said in a statement.

Virunga, Africa’s oldest national park, is home to over half the world’s mountain gorillas and hundreds of elephants. It has been plagued by violence since the late 1990s when two regional wars fought in the area gave rise to scores of militia groups.

Armed men have killed dozens of park rangers in the past few years, including six in an ambush in January and 12 in an attack in April of last year.

Muhukambuto currently leads a militia known as Mai-Mai Jackson MFP, which operates along the northwest shore of Lake Edward, according to the Kivu Security Tracker, which maps unrest in the region.

“In addition to his involvement in this trafficking, Jackson Muhukambuto is also held responsible for numerous crimes committed by armed men under his command,” the ICCN said.

“Over the past four years, their actions have cost the lives of 19 Virunga National Park rangers as well as many civilians and members of the armed forces.”

Virunga’s elephants are regularly targeted by poachers. Their numbers have plunged from around 8,000 in the 1950s to only several hundred today due to poaching, illegal agriculture and conflict.

Last year around 600 elephants crossed into Virunga from Uganda’s Queen Elizabeth National Park, rewilding the overgrown savannah, which has attracted other animals like buffalo, Ugandan antelope, warthogs, topi and a pair of lions.