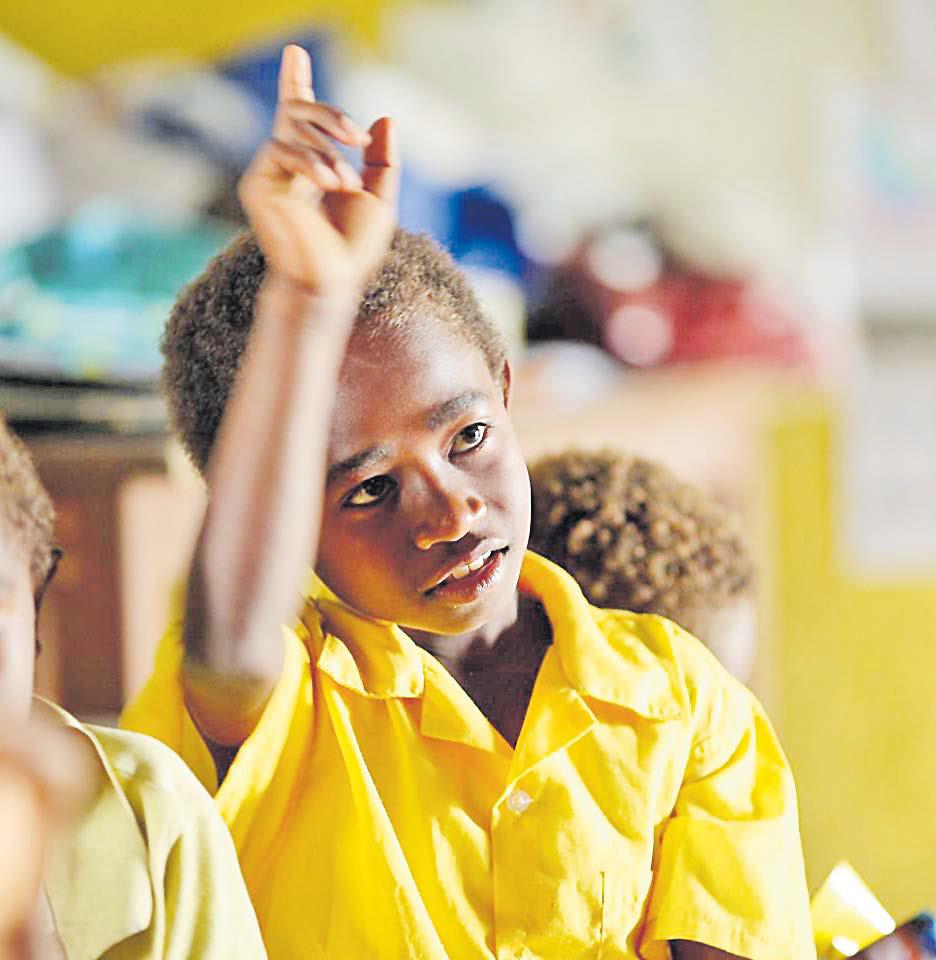 A student’s life is full of challenges, changes, growth and evolution. Picture: UNICEF

MORAL values are the key components of a person’s character. They are personality traits guiding people to make decisions and judgements according to their own sense of what is right and wrong, which is based on collective and individual experiences.

While moral values are essential in whatever stage of life we are in, the values that most adults have are the ones that were instilled in us during our childhood whether it be good or bad. They form the fundamentals in any student’s life.

It is said that children of today are the future of Fiji and this future of our country depends greatly upon the values imparted to them during their student life. Moral values pave the path for all their decisions in life, as without these values, children do not have any guidance and their life may seem directionless.

In order to be accepted and respected by society, parents, and teachers should make sure of imbibing these strong moral values in children as a lifestyle itself.

Additionally, looking at the current generation of the technocrats and the escalating “abnormal” behaviours in and outside the school premises, there is a dire need for moral education to be made compulsory, so that our schools can maintain the law and order to an optimum level.

Bullying, glue sniffing, dealing with drugs, ragging, street fights, cybersex and many others are heavily common amongst our Fijian children be it in primary or secondary schools. Sadly, all these are happening quite too often now and I strongly feel that somewhere someone is failing to address this issue in a more holistic way.

It is believed that moral values such as kindness, courage, humility, honesty, truthfulness, integrity, respect, hard-work, tolerance, compassion, empathy and inclusivity are extremely important to be instilled from an early age, to build a child’s character, as it forms the very core of their being and becomes the foundation of their moral beliefs throughout their lives. A student’s life is full of challenges, changes, growth and evolution.

A growing child imbibes a lot of lessons throughout their student years, most of which stick with them for the rest of their lives. Students with high ethical values become accountable, responsible and honest people, while those without moral values to abide by becoming a threat to themselves and society at large.

A strong character development happens because of the virtues and values that children learn during their childhood, which remains as a sound foundation for their moral beliefs in the future.  More imperatively, making moral values education as a compulsory subject at the national level would see exceptional amount of changes in our children. Like we say, good virtues start from home and in schools it gets nurtured.

Hence, parents play a very pivotal role in shaping their children’s future in whatever goodness they want to instil in their lives.

On the other hand, in schools, teachers are further harnessing those values by exhibiting them in practical terms such as, sharing and caring, assisting needy friends, respecting each other’s perceptions and so forth. Moral values give children perspective, make them strong and transpire firm beliefs in them, which makes them work hard and have courage when they are facing challenges during their school life.

Furthermore, the most important human endeavour is the striving for morality in our actions. Our inner balance and even our very existence depend on it.

Only morality in our actions can give us beauty and dignity to life. This beauty, defines you from all the odds and in return illuminates the spark from inside for all the goodness that you have been doing.

As such, there are four pillars of moral education that could be used as a guiding rudiments to make it a compulsory examinable subject in Fijian schools.  These four pillars can further be considered as the pinnacle to discipline the students in the most practical manner.

To add on, the first pillar looks into character and morality that delves upon individual beings and mainly concentrates upon their holistic character development. This mainly starts from the individuals him/herself in distinguishing almost anything and everything by hearing the ‘inner voice/instinct’.

Secondly, individual and community moral education concerns the individual towards showing how a person behaves himself/herself towards the community at large.

The third pillar looks into civic education that aims to inform the individuals of a nation on how the nation came to be what it is today.

Ideally, it narrates the finest work that our forefathers have done and the teachings of great scholars contributed towards the shaping of humanity in our nation.

Finally, the last pillar dwells upon the principles of civic education that integrates with cultural education.

Cultural education has everything in it that embeds our customs and traditions that will surely have an optimistic effect on the children of today.

Conclusively, compulsory moral values education are the building blocks of personality that help in building the better character of our children. It is absolutely imperative to teach moral values to students because it is then, that they take their first steps towards life and it matters that they do it right.

These moral values will shape their attitudes, beliefs, ideas and assist them to develop into undeterred and morally strong individuals.

Remember, that it is the role of parents and guardians to put their time and effort into imbibing these values in our children, as it is from their parents and teachers that children are inspired the most.

Children are extremely good observers and they follow what they see, so it is by role modelling that you can pass on this priceless treasure of virtues to your children who will, in turn, pass it on to the generations to come, to ultimately make Fiji a better place to abode. •