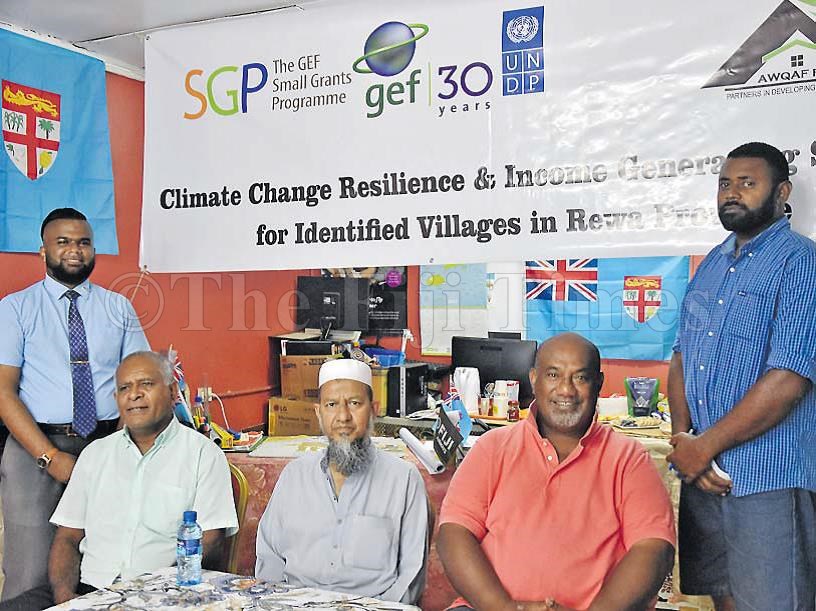 Non-Government organisation Awqaf Fiji was formed with the objective to bring about changes in selected villages in the Rewa Delta through their intervention programs.

Established in 2013, the organisation has worked with the selected villages on countless issues, including climate change and business acumen.

Awqaf Fiji co-ordinator Abdul Hafiz Ali who is also a certified business trainer, said their intervention programs were dependent on the passion showed by the beneficiaries of the program.

As a result of its work in the Rewa community, Awqaf Fiji recently received a grant from UNDP under the GEF small grants program with focus on climate change resilience and income generating support for identified villages in Rewa Province.

The organisation’s intervention programs include training on community awareness that relates to climate change which is pivotal given that there has being a lot of talk about climate change issues and it is high time that rural communities fully understand its impact and the important role they play in combating it.

Mr Ali said villages such as Nukkui, Suvalailai and Naivikisara have all benefited from their programs which included dogo and vertiver grass planting.

Food security is another program through which Awqaf supplies seeds and seedlings to the identified villages and works closely with Turaga ni Koros and Mata ni Tikinas within the selected villages who acts as monitoring officers in ensuring implementation on the ground.

Mr Ali said it was important to educate the communities on the importance of being self-sufficient when it came to food supply and also encouraged them, especially youths to get involved so that they could also generate some much-needed income.

“The setting of compost in every household is encouraged as it will supplement plant nutrients. Small holding poultry and provision of fishing nets on a 50:50 basis is encouraged.

Through their livelihood programs the organisation educates and trains the selected villagers in business with training in baking, sewing, screen printing and pandanus planting.

Mr Ali said the first baking training was conducted at Suvalailai Village on Monday and Tuesday.

Their livelihood program also includes land preparation on a 50:50 cost sharing business specifically on the use of Ministry of Agriculture machines.

He said on the pandanus and dogo planting project the villagers are paid the planting materials and a basic allowance for their effort in planting those plants, which means there was a double benefit whereby one was paid to plant their own crop.

“In addition, youths and women’s groups are encouraged to participate so in essence the whole village is involved. The planting of long term timber and tree crops is also encouraged.

Mr Ali said it took a while for progress to gather momentum as villagers often took time to conceptualise the role of NGO’s that work in their communities.

The Mata ni Tikina for Rewa, Alipate Senikuta said Awqaf Fiji at the right, adding that though Fiji was infiltrated by COVID-19, the intervention programs assisted and alleviated some of the costs in terms of backyard gardening and provided some income source in their livelihood in general.

“Mr Ali has the passion for helping out people in his community and we are grateful for all that he has done for the community,” he said.

He runs his travel agency and driving school which enables him to use the income from his business to fund the projects in addition to whatever assistance they get from friends overseas and local.

Mr Ali is confi dent that they need closer co-ordination with other line ministries so that their intervention program piggy back on those existing programs organised by government which will surely make the greatest impacts of the rural Rewans.

He is thankful of the support of the Turaga ni Koros of the selected villages and Mata ni Tikinas of Rewa and Burebasaga for their facilitative role in connecting the villagers.