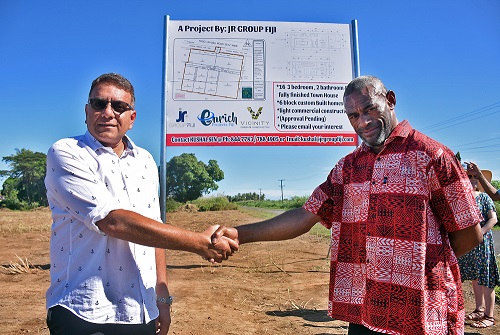 A $13-15 million housing and commercial project was launched yesterday at Lavusa in Nadi by JR Group (PTE) Ltd.

The project is in partnership with Mataqali Werelevu of Dratabu Village in Nadi.

“It is unique in nature as it encompasses a genuine partnership approach with the landowners giving them a return of at least three times more than a traditional development lease, including the amounts payable as a result of the sale of each individual block.

“Together with the annual ground rental income payable to the landowners in addition to this, we have agreed to develop a trust for the landowners which ensures the protection and continuity of their return from the development to ensure that its value is protected for their future generations.”

Once approved and built, the sixteen town houses will be available to purchase for first home buyers under an innovative affordable housing scheme that includes renting the for a maximum of three years, after which 50 per cent of the rental will be rebated back to be used as a deposit for the home purchase.

“The unique development, managed under a strata scheme will have outdoor common areas for children for recreational purposes and will for the creating of a great neighborhood community.”

It is estimated that construction will commence by April next year.