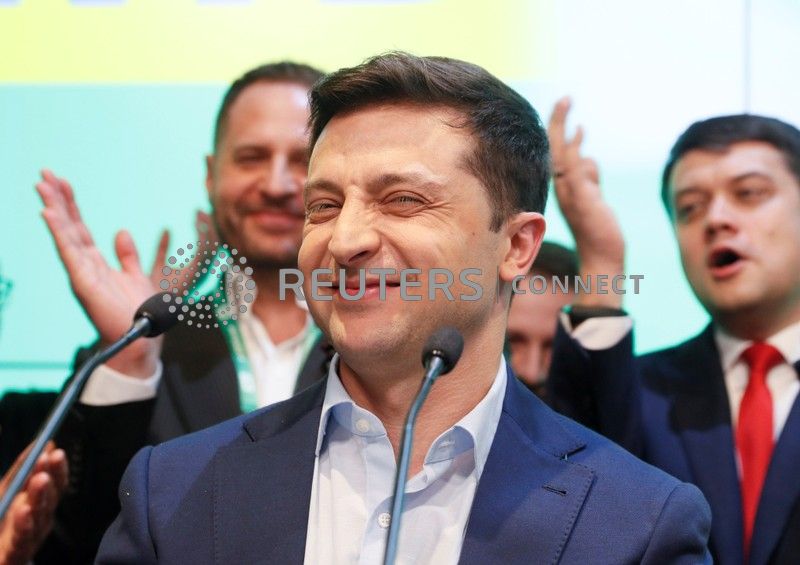 KIEV (Reuters) – Ukraine entered uncharted political waters on Sunday after an exit poll showed a comedian with no political experience and few detailed policies had easily won enough votes to become the next president of a country at war.

The apparent landslide victory of Volodymyr Zelenskiy, 41, is a bitter blow for incumbent Petro Poroshenko who tried to rally Ukrainians around the flag by casting himself as a bulwark against Russian aggression and a champion of Ukrainian identity.

If the poll is right, Zelenskiy, who plays a fictitious president in a popular TV series, will now take over the leadership of a country on the frontline of the West’s standoff with Russia following Moscow’s annexation of Crimea and support for a pro-Russian insurgency in eastern Ukraine.

Zelenskiy, whose victory fits a pattern of anti-establishment figures unseating incumbents in Europe and further afield, has promised to end the war in the eastern Donbass region and to root out corruption amid widespread dismay over rising prices and falling living standards.

But he has been coy about exactly how he plans to achieve all that. Investors want reassurances that he will accelerate reforms needed to attract foreign investment and keep the country in an International Monetary Fund programme.

“Since there is complete uncertainty about the economic policy of the person who will become president we simply don’t know what is going to happen and that worries the financial community,” said Serhiy Fursa, an investment banker at Dragon Capital in Kiev.

“We need to see what the first decisions are, the first appointments. We probably won’t understand how big these risks are earlier than June. Perhaps nothing will change.”