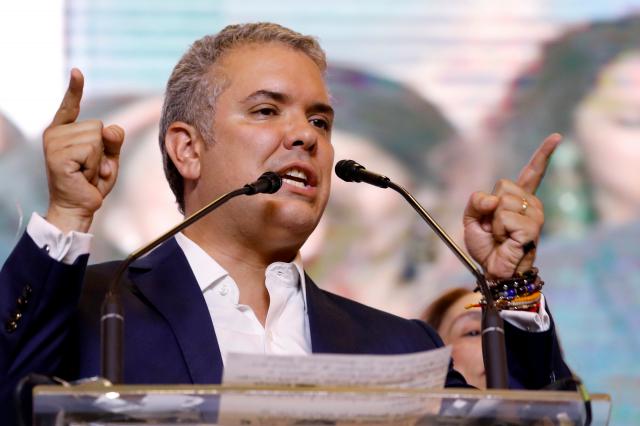 BOGOTA (Reuters) – Colombia’s President-elect Ivan Duque, who swept aside leftist Gustavo Petro in Sunday’s election, pledged to unite his South American nation after a divisive campaign but insisted he would change a landmark peace accord with leftist rebels.

Duque’s decisive victory in Sunday’s poll, with 54 percent of votes to Petro’s 42 percent, is likely to reassure investors in Latin America’s fourth-largest economy who were alarmed by the leftist candidate’s promise to overturn Colombia’s orthodox economic model.

Yet, in the first presidential election since the 2016 peace deal with the Revolutionary Armed Forces of Colombia (FARC), Duque worried Colombians with a promise to overhaul the accord that ended a five-decade conflict which killed more than 220,000 people and displaced millions. He has promised to impose tougher punishments on rebels for war crimes.

Surrounded by friends and family, Duque thanked voters for handing him the biggest electoral victory in Colombia’s history based on number of votes received. He struck a conciliatory tone, calling for the nation of more than 50 million people to unite behind him after a polarizing campaign.

“With humility and honor, I tell the Colombian people that I will give all my energies to unite our country. No more divisions,” Duque told a crowd of cheering supporters in Bogota.

“I will not govern with hatred.”

By contrast, former guerrilla Petro had pledged to take on political elites, redistribute land to the poor and gradually eliminate the need for oil and coal in Latin America’s fourth-largest economy. His positions prompted critics to compare him to Venezuela’s former socialist President Hugo Chavez.

Although Petro won a majority in only eight of 32 provinces, and the capital Bogota, the fact that a leftist advanced to the presidential runoff is historic in Colombia, where traditionally conservative politicians have held sway. Petro won 8 million votes versus 10.3 million for Duque.

Petro, 58, had called on supporters to take to the streets if he felt there was widespread manipulation of the tally, but he accepted the outcome of Sunday’s election.

“We accept Duque’s triumph. He is the president of the Republic of Colombia… Today we are the opposition to his government,” Petro, he will return to the Senate, told cheering supporters in Bogota.

Duque will face significant challenges when he takes office in August. The economy remains weak; drug trafficking gangs have moved into areas once controlled by the FARC and more than half a million Venezuelan migrants have crossed into Colombia, looking for food and work.

His plans to change the peace deal will face considerable opposition in Congress and from Colombia’s Constitutional Court.

On Sunday, he said he would make necessary “corrections” to the accord so victims’ rights receive greater priority and justice and reparations are respected.

“Peace is something all Colombians yearn for, and peace means that we turn the page on the fractures that have divided us into friends and enemies of peace,” he said, as confetti rained down and supporters danced and honked horns.

“Today, we’re all friends to build that peace and it must be a peace that above all allows the guerrilla base its demobilization, its disarmament and its effective reinsertion.”

“It is a result that’s very in line with what the market had been expecting and it guarantees that Colombia’s reputation – political and economic stability – is still valid,” Felipe Campos, head economist at Alianza brokerage, said.

Duque is the candidate for the Democratic Center Party, a movement started in 2013 by Uribe, seen as the power behind the throne.

A one-term senator, Duque worked at the Inter-American Development Bank in Washington until 2014, when Uribe asked him to return to Colombia and take a seat in Congress. Duque’s running mate, Marta Lucia Ramirez, will be Colombia’s first female vice president.

“Our hope has arrived,” said 52-year-old publicist Carlos Cortes, a Duque supporter. “Now, with more respect for private enterprise, more jobs will be generated and we’ll move forward as a country.”

For decades, Colombia’s fractured left has failed to come close to winning the presidency or exercising control in Congress, overshadowed by right-wing contenders who have promised strong security policies.

Yet the 2016 deal with the FARC clearly shifted priorities for many voters in the Andean country of nearly 50 million people.

Despite Petro’s loss, voter interest in tackling inequality, corruption and inadequate social services looks set to create opportunities for the left in future, possibly as soon as 2022.