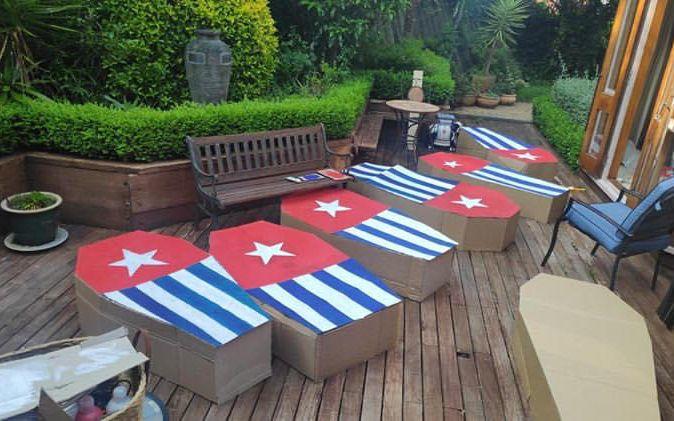 The group will walk with coffins to the NZ Parliament. Photo: Supplied

A group calling for an end to violence in West Papua say they have received threats in the lead-up to a protest at Parliament today, where they will display 57 coffins painted in West Papuan colours.

Members of the West Papua Action Aotearoa hīkoi have travelled from Dunedin, Christchurch and Auckland to protest at what they say is a regime of human rights violations against the West Papuan people by Indonesia, who took over in 1963. They will be joined by members of the Peace Movement Aotearoa at Parliament.

At least 10 people were killed in September in clashes involving Papuan demonstrators, which prompted New Zealand’s Foreign Ministry to express concerns to the Indonesian government.

One of the protest organisers, Jeremy Simons, said the conflict was the most violent struggle happening in the Pacific, and while many New Zealanders didn’t know much about it, many were supportive when told about it.

However, the group is distressed after online threats were made to a New Zealand citizen involved in organising the protest and posting information about the West Papuan cause online.

“That has been one of our concerns, because amongst Kiwi advocates, in all the years they’ve been advocating they’ve said none of them have actually received threats, so this is a significant development, we believe, in this advocacy that a New Zealand citizen would be a target of that.

“It is significant because it makes you start to question things, and look over your shoulder and wonder, because the Papuan students themselves are already afraid and concerned and their families can get threatened back home.”

Mr Simons says while the protest has the support of Papuans here, they have told the group they cannot join in, because of fears for their welfare and that of their families back home.

The threats were reported to police, but the group was disappointed by their response.

“She was told just simply to cancel her social media accounts if she was concerned, which just puts it back on her rather than the government and law enforcement taking it seriously.”

In a statement to RNZ, police said anyone who saw concerning material online or felt threatened in any way should contact them immediately on 111 to report it.

They said with regard to the threats made to the protest organiser, police would need a privacy waiver from her before they could make any comment.

Mr Simons said it was unclear if the threats were from an individual or a group, but it showed the effect of the political unrest “extends across borders”.

Interest in the cause had been particularly strong among Pasifika students here, he said.

“It’s a wide range of people who are concerned, but the numbers just shot up among the Pacific Island networks.

“There’s a rising consciousness among students here about their connections and the obligations we have to students in West Papua.”

The group will present a petition to the New Zealand government to put pressure on Indonesia for a ceasefire between its military, and activists, or to send New Zealand MPs to the area to observe the situation.

“The New Zealand government has a significant role and actually a unique place and role to play as a local neighbour that could take a stronger stand for human rights, for indigenous people’s rights, but also to play perhaps an intermediary role to achieve a political solution between West Papua, and the different groups that are struggling against the Indonesian government.”

He hopes signatures on a petition on the Change.org website entitled One Thousand Voices for West Papua will exceed 2000 signatories.

“People are really surprised and shocked to hear about what’s been happening, and many people have never heard about the West Papuan issue in spite of the fact it’s been over 50 years of struggle, and great suffering by the Papuan people.”

Tomorrow the group plan to raise a West Papuan Morning Star flag at Parliament, an offence that has resulted in jail time for protesters in Indonesia. Then they will walk with the coffins to the Indonesian Embassy.