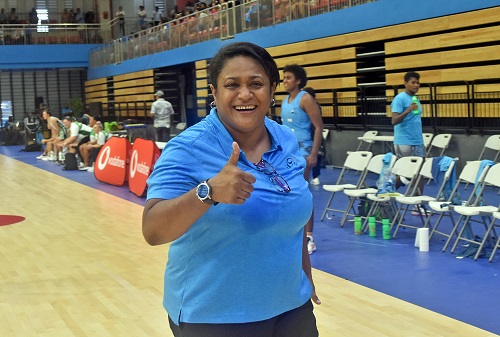 After being dropped from the Commonwealth Games, coach Unaisi Rokoura was given a tough task to revive the Fiji Pearls from its unsatisfying state.

“It kind of motivating the players because some of the players were looking forward to the Commonwealth Games,” Rokoura said.

“But again, you know, the Lord has different plan for us.

“We have set our plans for World Cup and today (Saturday) we have made it.”

The former national skipper first assignment was at the inaugural PacificAus Sports Netball Series in March.

The results were not satisfying despite a 55-44 win against Samoa, 78-40 over Papua New Guinea but went down to the Tongans 60-52.

This week Rokoura right all the wrongs and silence the critics for her bold desire to rescue netball in Fiji at the Vodafone Oceania Netball World Cup Qualifier.

The Pearls first game recorded a convincing 74-32 over the PNG Pepes and were comfortably beaten by Tonga Tala 29-59 but hold off a firing Samoan team 45-43.

After Friday night’s victory, the Pearls were one foot to the pane to South Africa but confirmed their seat against the Cook Island last night.

She said the players gave all their energy to perform and grabbed every possession that they could.

She said the players played like it was the last game of their lives, “This win means everything to us,” Rokoura said.

“It means the world to us you, know it was now or never for the girls tonight.

“If not we would have to wait for the next four years.”